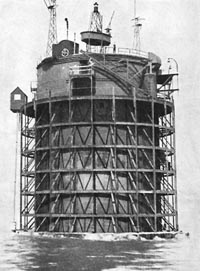 The Nab Tower is located at the entrance to the main Solent shipping channel, to the east of Bembridge, Isle of Wight. If you look out to sea from Eastney toward the horizon, just east of the Isle of Wight, you will see a squat looking structure, that is the Nab Tower. The Nab Tower is located on the Nab Rocks and close to the entrance to the 396m wide Nab channel, this channel is dredged to a depth of 13.3m and is intended for the use of deep-draft vessels such as tankers and container vessels. It's actual position is 50° 40'.05N and 0° 57'.07W.

The present Nab Tower positioned in 1920, replaced the earlier Nab Lightship which had been here since 1812 but was not large enough for the more modern lighthouse lamps and equipment being introduced.

The tower was originally built as part of a bold defensive project to protect the English Channel from German U-Boats during the First World War. Twelve towers were to be constructed and then positioned across the channel in a line from Dungerness to Calais, with nets strung between the towers the U-Boats would be prevented from entering the English Channel from the North Sea.

The towers, which weigh 10,000 tons, were constructed in Shoreham Harbour but the war finished before the project could be completed, only two of the towers were actually finished in 1919.

With the war over the defensive line was never built, one of the towers was instead used as a replacement for the ageing Nab Lightship. The towers were built using a design consisting of a concrete base and a steel work upper tower section.

The tower was floated into position and the concrete base was then flooded, sinking the structure onto the sea floor. The Nab Tower was towed into position on 12th September 1920, unfortunately when it sank the tower did not settle fully level and therefore it tilts over by approximately 1°.

Originally the lighthouse was manned by light house keepers who did a two month spell of duty followed by one month off. At Christmas it was a tradition that the Bembridge lifeboat would visit the Nab taking presents donated by the people of Bembridge, the vicar of Bembridge also visited and a carol service was held.

The Nab Tower was automated in 1983 so is no longer manned. In 1995 the lighthouse was converted to run on solar power.

In 2013 the Nab Tower underwent a refurbishment programme, the top sections of the steel structure were removed, maintenance work was carried out and new AIS and RACON beacons were fitted.