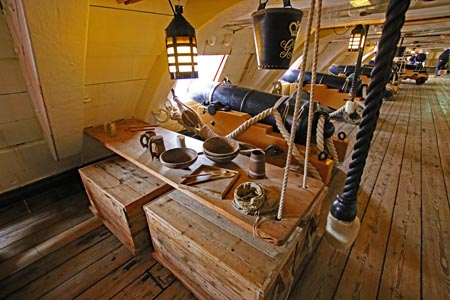 HMS Victory housed in Portsmouth Dockyard's No 2 dry dock, was built between 1759 and 1765 at Chatham Dockyard in Kent. Designed by Sir Thomas Slade, the Senior Surveyor of the Royal Navy with a final cost of £63,176. The Victory lay at moorings for 13 years after being built due to a period of relative peace.

In 1778 with a war with France seemingly imminent, HMS Victory was chosen as the flagship of Admiral Augustus Keppel. In 1779 after the declaration of war with France, Keppel set sail with a fleet of 25 ships, a further five joined at Plymouth. His plan, to find and engage with the French fleet under the command of Admiral D'Orvilliers. After much maneuvering, the two fleets engaged 100 miles west of Ushant on the Brittany coast. Both fleets sustained major damage, so many spars were shot away that only Victory and four other ships were able to continue. Victory had 11 sailors killed, 24 wounded and had major damage to both it's hull and rigging. Following this action Keppel was tried by court-martial for not doing his best to "burn, sink or destroy" the enemy, he was however honourably acquitted.

Admiral Hyde Parker sailed HMS Victory in the North Sea but she was deemed ill adapted for such narrow waters and returned to Spithead as a Commodore ship.

Admiral Kempenfelt took command of HMS Victory in 1781 and in December 1781 was sent to intercept M. de Guichen taking a convoy to Count de Grasse, Commanding a squadron of 17 ships Kempenfelt managed to capture 15 French warships and forced them, fighting all of the way, back into the naval port of Plymouth. 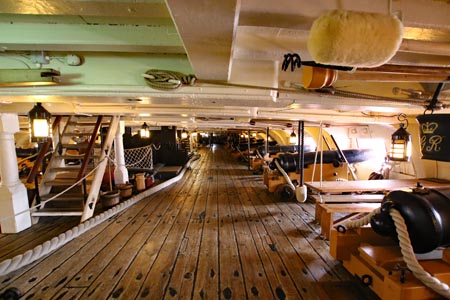 Lord Hood was the next commander to make HMS Victory his flag ship and she had a successful tour of duty in the Mediterranean, in Corsica seven of Victory's guns were dragged ashore and used in the taking of the town of Calvi, during these actions Nelson played a major role, distinguishing himself as a formidable officer. Following this tour of duty Victory returned home and a complete refit was carried out.

Next in command in 1795 was Sir John Jervis, Victory was again based in the Mediterranean. In August 1796 HMS Victory was among 13 ships based at Toulon when an alliance between France and Spain meant that the British squadron was vastly outnumbered, Corsica was relinquished and the squadron sailed to Lisbon where the British fleet was brought up to strength being joined other Royal Navy vessels. Nelson joined the fleet from Gibraltar, having been chased by two Spanish battleships, he had in fact sighted the main enemy fleet.

Horatio Nelson joined HMS Victory from Gibraltar and at the battle of St Vincent, with Nelson as Captain, Victory played a major role, four prizes were captured with Victory having one casualty and eight wounded men.
After the blockade of Cadiz, Victory was surveyed and deemed not fit for service, she returned to Chatham and spent a period on the River Medway serving as a hospital ship. From 1800 to 1803 HMS Victory underwent substantial rebuilding at Chatham Dockyard at a cost of £70,993.

In 1803 Nelson was appointed Commander-in-Chief in the Mediterranean and chose HMS Victory as his flagship. In January 1805 the French fleet escaped the Mediterranean, joined the Spanish at Cadiz and set sail for the West Indies. This was a decoy strategy to lure the English fleet away from Europe to allow Napoleon to mount an invasion of England.

The English fleet chased the French and Spanish across the Atlantic and back to Cadiz, the invasion fleet was intercepted in the English Channel by Sir Robert Calder, Napoleon changed his plans and diverted his invasion force to fight at the Battle of Austerlitz.

THE BATTLE OF TRAFALGAR

Nelson's famous victory at Trafalgar helped give the British Army clear supply lines for the European campaign fighting against Napoleon, a crucial factor in allowing Wellington to defeat Napoleon at Waterloo in 1815. 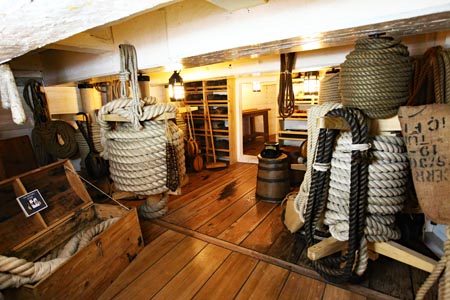 The battle took place, on the 21st October 1805, off of Cape Trafalgar off the south-west coast of Spain, the British fleet consisted of 27 ships against a combined fleet of 33 French and Spanish warships.

No English ships were destroyed at Trafalgar but 7,000 French and Spanish, and 1,500 British seamen were killed or wounded, among them of course was Vice Admiral Horatio Nelson himself. During the engagement between HMS Victory and the Redoubtable, a French sniper hit Nelson in the spine, fatally wounding him, he was returned to England and was buried following a full state funeral.

In 1922, under pressure from the Society for Nautical Research, HMS Victory was placed in No2 Dry Dock in Portsmouth's Royal Naval Dockyard, work then began on restoring the ship to her 1805 condition.

HMS Victory is the only remaining 18th century ship of the line anywhere in the world. She is the oldest serving warship still in commission, she flies the flag of the Second Sea Lord, Commander in Chief Naval Home Command and still has her own Captain, officers and crew. For visitor details visit the Historic Dockyard website. 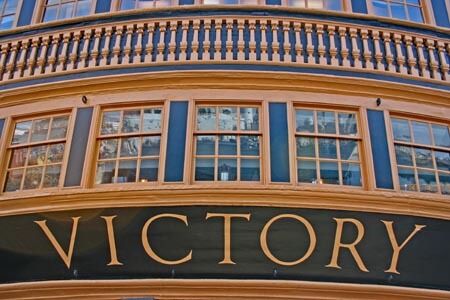 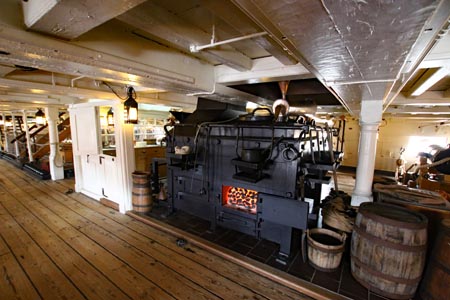