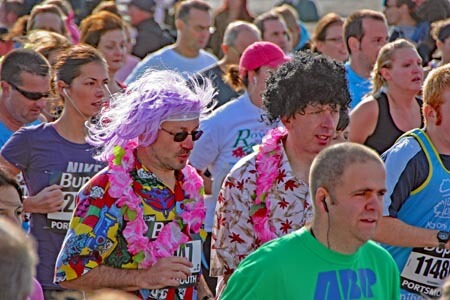 The Great South Run is Europe's most popular 10 mile race and started life in Southampton in 1990 before moving just a few miles east to Portsmouth twelve months later.

Dutchman Marti ten Kate was the winner of the inaugural 10-mile event in 47 minutes 52 seconds while Alison Gooderham, who surprised herself with a fast clocking of 56min 09sec, was the women's winner.

The Diet Coke Great South Run (as it was then known), relocated to the present course in 1991. Prison officer Thomas Naali from Tanzania escaped from the field to take first place while Olga Bondarenko, the reigning Olympic 10,000m champion from Russia, clinched a star-studded women's race.

Another Tanzanian, Boay Akonay, was winner in 1992 - the first year the race was known as the BUPA Great South Run - with Iulia Negura from Romania scoring the first of her two successive victories.

Gary Staines became the first British winner of the men's race a year later when setting a very fast course record and British best of 46:11 and he repeated the feat in 1994 to defeat world marathon champion Douglas Wakiihuri as well as world cross country champion John Treacy. Denmark's Gitte Karlshoj was women's champion.

In 1995 Benson Masya, after having just won a third Bupa Great North Run, spoiled Staines' ambitions of completing a hat-trick of Great South successes with a still-standing UK All-Comers record time of 45:56. Liz McColgan, fighting her way back to fitness, flew in from Scotland to show a clean pair of heels to her rivals with a winning time of 53:12.

Staines won again in 1996 while Derartu Tulu set a women's course record of 52:39, though it only stood a year as McColgan bettered the mark by 39 seconds, while Kenya's Christopher Kelong won the men's title in 47:40.

Germany's Stephane Franke, the European 10,000m bronze medallist, was men's winner in 1998, while Marian Sutton bettered her runner-up spot of two years previously to triumph in the women's event.

Simon Kisamili and Esther Kiplagat were the winners in 1999, however the following year (2000) the event had to be postponed due to flooding in Southsea and Eastney. Rearranged to November, Gert Thys of South Africa and Restituta Joseph from Tanzania were the winners on a day of high winds.

O'Sullivan was again the winner in 2003 while John Yuda, an experienced half marathon runner, became yet another Tanzanian winner in Portsmouth.

2004 belonged to Hendrick Ramaala, who went on to win the New York Marathon, while Benita Willis (then Johnson), Australia's World Cross Country champion, flew to a 52:32 win.

In 2005 Ramaala failed to defend his title when beaten by John Yuda. Derartu Tulu notched a second women's title in Portsmouth, having recently claimed victory at the Bupa Great North Run. 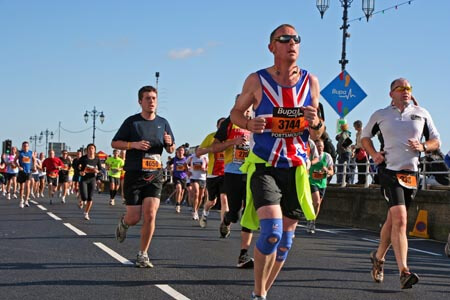 Britain's Jo Pavey showed she had the ability to transform herself from a track specialist into a world class road runner when she triumphed in the 2006 race. Her compatriot Jon Brown just missed out on the men's title when beaten in a sprint finish by Kenya's Simon Arusei.

Kenyan's Luke Kibet and Rose Cheruiyot were victorious in 2007 while Paula Radcliffe setting a UK best performance of 51:11, savoured success the following year when easily thwarting the ambitions of Jessica Augusto and Magdalene Mukunzi, the Portugese and Kenyan runners finishing in 53:15 and 53:18 respectively.

Radcliffe, until the six miles marker was still well on target to smash the Lornah Kiplagat's world best performance of 50min 49.6sec but decided because of the gusty wind, to keep something in reserve. She said: "I felt in the last two miles it was going to be really windy, so saved a lit bit for that. Actually it wasn't as bad down the sea front as I was psyched up for it to be."

In 2008 Kenya's Bernard Kipyego added the men's title to his success at the Bupa Great Edinburgh Run in May, destroying the field very early to win in 46:43. Irishman Martin Fagan produced a storming finish to snatch second spot just three seconds ahead of the winner's fellow countryman and defending champion Luke Kibet in a time of 46min 58sec.

In 2009, Mo Farah scored the first ever victory by a British male athlete since Gary Staines achieved his third and final success 13 years earlier. Farah, in the best ever finish to the 10 miles race recovered to win ahead of Stephen Mokoka by a second in a time of 46:25 with Luke Kibet, the 2007 champion, third in 47:16.

Ines Monteiro took a leaf out of the book of fellow Portuguese Jessica Augusto, winner of the 2009 Bupa Great North Run, when splitting the field after two miles to win the women's event. The European cross country bronze medallist, clocking a national record of 52:32, finished 86 seconds ahead of fellow countrywoman Ana Dulce Felix with Australian Benita Willis, the 2004 winner, third in 54:41.

World cross country champion Joseph Ebuya produced the fastest 10-mile run ever seen in the UK in the 2010 event, racing to a stunning time of 45:16 on a lovely sunny and calm day in Portsmouth. The 23-year-old Kenyan raced clear of eventual runner-up Saif Saeed Shaheen of Qatar and fellow countryman Vincent Yator, who finished third, with around three miles to go and comfortably overhauled Benson Masya's 15-year-old previous best mark by a huge 40 seconds.

Grace Momyani, who had won the 10,000m gold medal at the Commonwealth Games in Delhi at the start of the month, made it the first Kenyan double for the three years when taking the women's title in 52:03. Britain's Freya Murray produced a great performance to record 52:27 and seal the runners-up berth with Aniko Kalovics of Hungary third in 53.01.

In 2011 World 10km and 15km record holder Leonard Komen planning to attack Haile Gebrselassie's World 10 miles best performance saw his attempt fall well short of his target of 44:23. Komen who made his intentions publicly known beforehand but went off too quickly covering the first mile in 4:12 won in a time of 46:18. He was followed home by fellow Kenyan and World marathon champion Abel Kirui who he beat by 22sec with Ireland's Alistair Cragg third in 47:14. Ethiopia's former World half marathon runner-up Asselefech Mergia won the women's race 52:55 ahead of the Kenyan pair of Commonwealth 10,000m silver medallist Doris Changeywo and the Games' marathon champion Irene Jerotich who clocked 53:34 and 53:43.