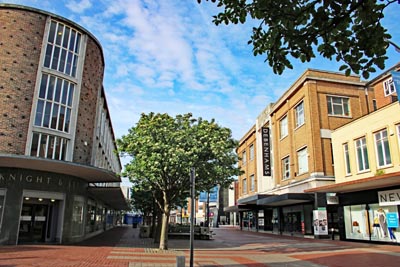 Palmerston Road is the main shopping area in Southsea and is situated just north of Southsea Common. It is smaller than its rival Commercial Road, but has an interesting mix of national retailers, smaller specialist stores, cafes and restaurants.

The Southsea Shopping Area consists of the Palmerston Road pedestrianised precinct, Marmion Road, Osbourne Road and a section of Clarendon Road close to it's junction with Palmerston Road itself. The shops in this area provide approximately 20,000m² of retail space.

The major shops and stores are located on the pedestrianised section of Palmerston Road precinct. Until early in 2020 Debenhams had a large department store here, unfortunately due to financial problems this has now closed.

Until July 2019 Knight and Lee (part of the John Lewis Partnership) had a department store here, on the corner of Palmerston Road and Osborne Road. Knight and Lee first opened here in 1865, it was taken over by John Lewis in 1933 and was one of only two stores in the group to retain it's original name. But difficult trading conditions and the need for significant investment forced the closure of the shop. Waitrose, (also part of the John Lewis Partnership), has a large supermarket and multi storey car park located on Marmion Road.

This part of Southsea was originally developed during the early 19th century. Palmerston Road was originally the southern part of Grove Road, built in about 1820 and developed into a commercial centre throughout the following years.

Extensive damage during the Second World War required major rebuilding in the late 1940's and early 1950's when many of the buildings that can be seen today were constructed. 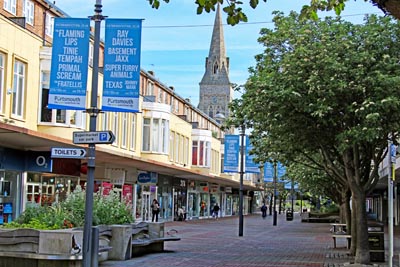 Knight and Lee had a shop here ever since 1865, it was founded by Jesse Knight and Herbert Soden Lee, it was destroyed in 1941 during the Blitz, but was rebuilt and re-opened in 1956, it closed in July 2019.

In 1979 Palmerston Road was closed to traffic and the present precinct was developed, around the same time Waitrose was built in Marmion Road.

Today the Southsea Shopping Area is home to a mixture of national chain stores, smaller independent traders as well as a wide range of bars, cafes, restaurants, and pubs.

The section of Palmerston Road south of Osbourne Road has now also been closed to traffic, apart from delivery vehicles. Regular farmers markets and craft markets are held in the pedestrianised precinct. What shops are in Southsea?