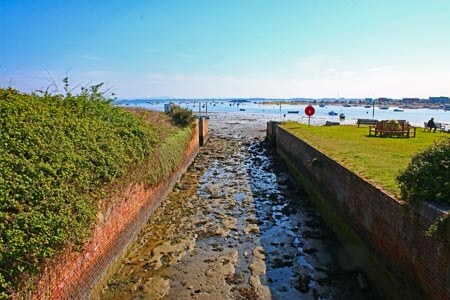 It's not obvious today, but if you look closely there are still signs of the Portsmouth Canal which was designed to connect Portsmouth to London, without the need to sail around the English Channel coast. During the early 19th century large amounts of goods were transported between London and the south coast ports by coasters.

As England was at war with France it was feared that these trade routes could be easily disrupted by the French attacking from the sea. The road system at this time was poor, so an inland waterway, linking London to Portsmouth was proposed.

The southern section of this waterway linked Portsmouth to Arundel via the Arun Navigation, the Wey and Arun Canal, the Wey Navigation and the River Thames. Barges passed through a dredged channel at the southern coast of Thorney Island then passed north of Hayling Island into Langstone Harbour and then entered the Portsea Canal at its entrance at Milton.

A bill was passed in Parliament in 1817 allowing the Portsmouth Arundel Navigation to be built and, as laid down in the terms of the bill, a company was formed, this raised £101,250 for the construction work, the principal shareholder being Earl Egremont. George O'Brien Wyndham the 3rd Earl of Egremont was a major landowner who lived at Petworth House in Sussex. A steam tug which was used to tow barges across Chichester and Langstone Harbours to the Portsmouth Canal was named Egremont after the Earl.

In 1818 Dyson and Thornton, the principal contractors began, construction. The route of the canal across Portsea Island is shown on the map below.

At Milton two sets of locks and a basin were constructed allowing access from the canal to Langstone Harbour when the tide was high, the basin allowed boats to moor until the tide was high and the locks could be opened. The remains of one lock can still be seen today, but the second lock which was opposite the Oyster House pub has been filled in and built over.

Located at the inland end of the canal, roughly in the area where Arundel Street is today, at the Halfway Houses, a basin was built to allow the loading and unloading of boats, maybe this is how Arundel Street got its name.

The Portsea section of canal opened on the 19th of September 1822 and was able to carry vessels of up to 150 tons and the whole canal opened May 1823.

The whole project cost £125,000 to build, with the canal being opened in stages and the first stage opened on the 26th May 1823. In 1824 only 3,000 tons of freight used the canal which was less than one twelfth of its projected usage. By 1830 the charges were lowered and so there was a slight pick up in usage. 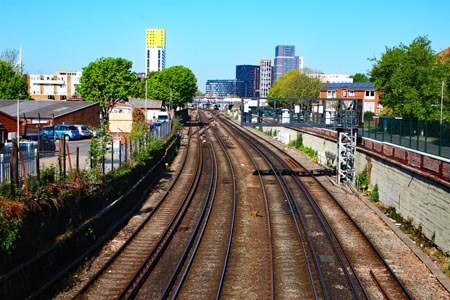 To supply the water for the canal, a pump house was built at Milton which pumped water via well and pipe from the sea into the canal. This building can still be seen just off of Locksway Road (it's name a reference to the canal locks) today, it is labelled on the map and is now a private house.

The canal scheme in Portsmouth had many problems and trade never matched the levels predicted, limiting the income of the canal company. Sea water leaked from the canal contaminating local wells and water sources that Portsmouth's residents relied on, there being no other reliable water source at this time. The contamination problem became so bad that the Portsea section of the canal had to be abandoned and by 1855 only the Chichester to Chichester Harbour section was still open.

The canal bed, between Fratton Bridge and Portsmouth and Southsea station, was later used to lay the railway track in and another section became Goldsmith Avenue. Part of the sea locks can still be seen at Milton, just east of the Thatched House pub and many other reminders can be seen along the route, new housing known as Towpath Mead in Milton, the Old Canal Inn a pub in Milton, the railway section west of Fratton Station and running alongside this the street is called Canal Walk.

From the late 18th century, large gangs of workmen moved around the country, digging canals with picks, shovels and wheelbarrows. Canals were called "inland navigations", so these builders came to be called "navigators", shortened by the public to "navvies" (often used as a term of abuse). 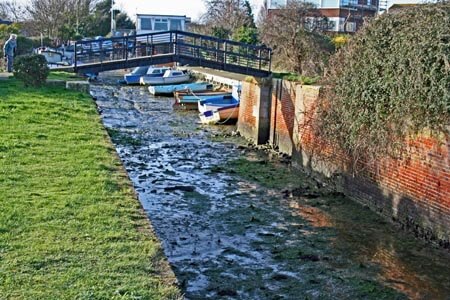 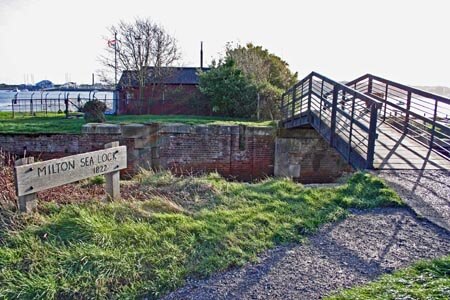