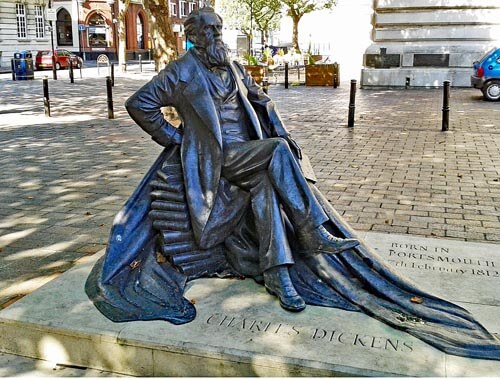 Charles Dickens, born in Portsmouth arguably one of the greatest and certainly the most enduring English novelist and writer, was born on 7th February 1812, at 1 Mile End Terrace, Landport, now known as 393 Old Commercial Road, Portsmouth.

His father John Dickens was employed as an 'extra clerk' in the Admiralty pay office based at nearby Portsmouth Dockyard, but was regularly in debt, causing the family to occasionally move house as a consequence.

In addition to 393 Old Commercial Road, the Dickens birthplace museum, they also lived at 16 Hawke Street, Portsmouth in June 1812 before returning to London in 1814. John Dickens financial problems eventually caught up with him and the entire family, apart from Charles, were sent to Marshalsea Prison the debtors prison at Southwark, London, this is said to have inspired Dickens to write the character of Mr Micawber in 'David Copperfield'.

Although he avoided going to prison with the rest of his family Charles was sent to work, at age 12, at Warren's Boot Blacking factory located at 30 Hungerford Stairs, the Strand. Here he experienced appalling working conditions labelling shoe-black bottles, earning money to support his imprisoned family. These experiences were later used and fictionalised in 'David Copperfield' and 'Great Expectations'.

Debtors often died in prison due to the poor conditions and as they were not able to work they could rarely repay their debts and escape, the Dickens family however were spared the misery of prison when one of John Dickens relatives died, leaving enough money for the family to resolve their debts and be freed.

Charles Dickens was eventually able to return to school at Wellington House Academy, although strangely his mother wanted him to continue at the Warrens factory, subsequently working at Gray's Inn as a clerk, as a Parliamentary reporter and eventually as a Journalist at The Morning Chronicle in 1834. Dickens work was first published in Monthly Magazine in December 1833, he used the pen name of Boz, these articles were later published as a compilation called Sketches by Boz. 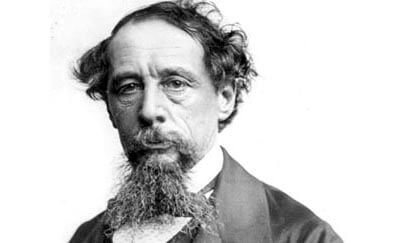 Charles Dickens draws on his memories of Portsmouth in Nicholas Nickleby, Nicholas and Smike tramped to Portsmouth and Mr. Crummles lived in St. Thomas's Street and there they lived 'off mutton and onion sauce'.

Dickens married Catherine Hogarth, daughter of George Hogarth his editor and although they had 10 children together, their marriage was troubled and they separated in 1858.

He spent the last 13 years of his life with his mistress the Actress Ellen Ternan, she died in 1914 whilst living with her sister Fanny in Victoria Grove, Southsea, she is buried at Highland Road Cemetery, Southsea.

Also buried in Highland Road Cemetery is Maria Beadnell, Charles Dickens first love, he was rejected by her family as being unsuitable, Dickens later used her as the character Dora in David Copperfield.

The house at Old Commercial Road came up for sale in 1903 and Portsmouth Corporation bought it, opening it to the public on the 22nd July 1904, as a museum dedicated to the great author. The furniture and household objects at the Charles Dickens Birthplace Museum, have been used to recreate the house as it would have been when the Dickens family lived there, unfortunately these objects are not their actual possessions.

There are three furnished rooms in the house, the bedroom where Charles was born, the parlour and the dining room, The most important item at the museum is the couch on which Charles Dickens died at Gad's Hill Place on 9 June 1870. This couch was presented to the museum in 1909 by Georgina Hogarth, Dickens's sister-in-law. Other personal items belonging to Dickens at the museum include his snuff box, inkwell and paper knife.

The Central Library in Guildhall Square, Portsmouth, houses a collection of approximately 1,500 Dickens items
These range from some first editions of his novels, copies of his main periodicals "Household Words" and "All the Year Round" in addition to plays, poems and letters.

The collection is situated on the second floor of the Library and contains 1,500 books and 100 reels of microfilm.