AN EASY WALK AROUND SOUTHSEA COMMON 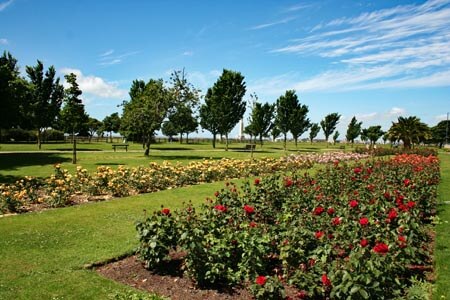 This walk around Southsea Common is a gentle stroll and will take approximately 1 hour, it offers sea views, interesting historic memorials and the birthplace of a famous British comedian.

You can park at Clarence Pier car park, Esplanade car park or on the street in the area.

Starting at the Hovertravel terminal on the seafront, where Hovercraft travel from Portsmouth to Ryde on the Isle of Wight, proceed in an easterly direction along the promenade, the fun fair should be behind you.

The first memorial you will come to is the Trafalgar memorial, an anchor from HMS Victory mounted on a plinth. This memorial was originally situated further to the west, marking the spot that Lord Nelson left England for the final time on route to the Battle of Trafalgar in 1805. Displayed on the base of the memorial is Nelson's famous "England expects........" address.

Continue eastward and you will see two more naval memorials, the first HMS Chesapeake and then further on HMS Shannon, both erected in commemoration to the men and officers lost in battle.

On the opposite side of the road you will see the tall Royal Navy war memorial, This memorial commemorates officers ranks and ratings of this Port who died at sea during the wars 1914-1918 and 1939-1945. Of the 24,588 men and women whose names are on this monument 9,666 died during the First World War and 14,922 including 75 from Newfoundland who served in the Royal Navy during the Second World War.

Continue along the seafront and you will come to a tall obelisk type memorial, the Crimean memorial erected in 1857 in memory to those servicemen killed in the Crimean war.

Continuing in the eastward direction you will pass the Blue Reef aquarium and the Tourist Information centre on your right hand side. Carry on along the pavement that follows the road until you come to the D-Day Story.

Cross the road at the pedestrian crossing, just beyond the D-Day Story museum and follow Avenue de Caen which runs north towards Southsea shopping area, on your right hand side you will pass Southsea Skate Park.

Continue to the top of Avenue de Caen and then turn left and follow the tree lined footpath which crosses the common, parallel to the seafront. This is known as Ladies Mile and was a popular place to stroll and show off the latest fashions for Victorian ladies.

Continue west following this path, until you pass in front of the Queens Hotel on your right hand side, just past here cross the road at the pedestrian crossing. At the far side turn left, westward again, for a couple of hundred yards, crossing Western Parade, back onto the Common.

Walk parallel to Western Parade, on your right, until you reach the northern edge of Southsea Common, opposite you is Castle Road, Sellers coffee shop is on one corner and the Mayfair Chinese restaurant on the other.

It was in a flat above the restaurant that Peter Sellers, star of the Goons, the Pink Panther films and many other productions, was born Richard Henry Sellers on September 8, 1925.

At this point, turn south and follow the footpath that cuts diagonally south across the common, all of the way back to Clarence Pier where the Fun Fair is situated.

You will need to cross Duisburg Way half way down, just continue following the path on the other side of the road.

This is the end of the walk around Southsea Common.