The Portsmouth Hall of Fame displays the details of some of Portsmouth's famous residents, some of who were born in Portsmouth and others who lived and worked in the City. Portsmouth has a wealth of famous people both past and present, these include writers, politicians, sports personalities and musicians.

If you know of someone who you feel should be included on these pages, but is missing, then please send us an email to info@welcometoportsmouth.co.uk and let us know the details. 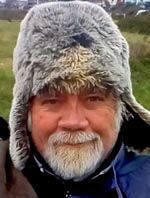 Born 1944 in Portsmouth (almost), his mother moved to Hayling island for the birth to avoid the wartime bombing, George East is an author and broadcaster. George is a prolific and humorous writer, he was heavily involved in Radio Victory from the outset in 1975 as a producer and wrote the first ever comedy series 'A Touch of the Other' for independent radio.
George's series of books 'The Mill of the Flea' set on the Cotentin peninsula of Cherbourg became bestsellers and 'A Year Behind Bars', about running a busy town pub in Portsmouth was also a great success. George is a well-known writer of murder mystery novels, centred around Portsmouth.
His latest book, published by la Puce Publications in December 2020 'Just a Pompey Boy' reflects on his experiences growing up in Portsmouth during the years following The Blitz.

Musician Phillip 'Spike' Edney was born 11th December 1951 in Portsmouth.
He is often referred to as the 5th member of Queen because of the amount of concerts played with them. During the mid-1970s, he recorded and toured with The Tymes and Ben E. King, playing keyboards, bass, guitar and trombone. In the late 1970s, he was musical director for Edwin Starr and, during the early 1980s, worked with Duran Duran, the Boomtown Rats, Dexys Midnight Runners, Bucks Fizz, Haircut One Hundred and The Rolling Stones. Edney's collaboration with Queen included mostly keyboards (his main instrument), plus rhythm guitar and backing vocals.

The author Neil Gaiman was born in Portchester on November 10th 1960.
Neil started his career as a journalist and his early books included a Duran Duran biography and the Douglas Adams biography, 'Don't Panic: The Official Hitch Hiker's Guide to the Galaxy Companion.'
He has a wide repertoire including science fiction, fantasy, childrens and adult novels. Neil wrote the cult Sandman series of graphic novels as well as the children's fantasy novels Coralline and Stardust, both of which were made into films, he has also written several episodes of the Dr Who TV series.
Neil Gaiman's work has been honoured with many awards internationally, including the Newbery and Carnegie Medals.

Born in Portsmouth in 1969, Murray Gold is a composer, working mainly in Film, Television and Theatre. He attended Portsmouth Grammar School then Cambridge University where he studied History.
Murray is best known as the core composer of the hit BBC TV series Doctor Who and the spin off series Torchwood and has been nominated for a BAFTA four times in the category Best Original Television Music.
He has also written music for The Second Coming (starring Christopher Ecclestone), Servants (BBC series), Clocking Off and Channel Four's series Shameless.

Jonas Hanway (1712-1786), traveller, prison reformer and philanthropist, was born at St Georges Square in Portsea on the 12th August 1712.
He founded the Marine Society to keep up the supply of British seamen, in 1758 he became a governor of the Foundling Hospital and was instrumental in establishing the Magdalen Hospital.
He is most famous as the first man to carry an umbrella on the streets of London, to the derision and outrage of hackney carriage coachmen, who feared for their business.

Christopher Eric Hitchens (1949 - 2011) was born in Portsmouth, England and was one of the best known and most controversial figures in contemporary American media.
He was a prolific author, journalist, literary critic, and public intellectual who was often described as a "contrarian". He has been a columnist at Vanity Fair, The Nation, Slate, and an occasional contributor to many other publications. Christopher died on 15th December 2011 aged 62.

Vocalist, composer and songwriter of the band Supertramp, Roger Hodgson, was born in Portsmouth on 21st March 1950 the son of Charles and Jill Hodgson, he grew up in Oxford. He spent a large part of his childhood years at boarding school in Surrey where he first learnt to play the guitar and later piano, bass and drums.
After leaving school Roger recorded his first record "Mr. Boyd" with a session band including pianist Reg Dwight (Elton John).
Roger met Rick Davies and together they went on to form the band Supertramp, releasing their first album "Supertramp" in 1970. Supertramp had worldwide success with albums such as Crime of the Century, Breakfast in America and Crisis? What Crisis? Roger left Supertramp in 1983 to persue a solo career and to spend more time with his family, he is still writing and performing in concerts and performing solo.

The lead singer of Bad Company since 1983, when he took over from Paul Rodgers, Brian Howe was born in Portsmouth in 1953. Howe sang with Portsmouth band Shy, was briefly in the band White Spirit. In 1984 sang with Ted Nugent and later after a call from Mick Jones of Foreigner, Howe joined Bad Company.

In 1997 Howe released his first solo album, Tangled in Blue. It was re-released with one additional song under the name Touch in 2003 on MTM Music and Publishing. Howe died aged 66 on 6th May 2020, travelling to hospital in Florida following a heart attack.