THE STAR AND CRESCENT 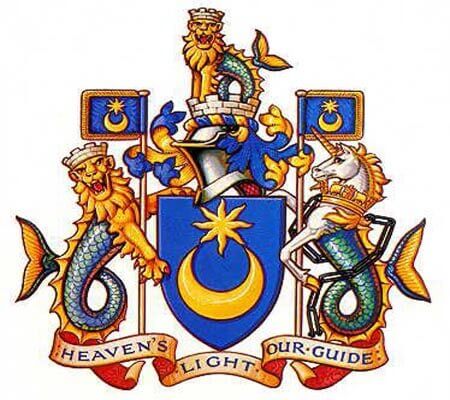 The Star and Crescent adorns the Portsmouth Crest or more correctly the Portsmouth Coat of Arms, it consists of an eight pointed star, above a crescent moon on an azure background.

The Star and Crescent symbol has been used by the City of Portsmouth as it's coat of arms for at least seven hundred years and is mentioned in the Heraldic Visitations of both 1622 and 1686. Heraldic Visitations were inspections made by Kings of Arms to register and regulate the coats of arms of nobility, gentry and boroughs throughout England, Wales and Ireland

This symbol is widely associated with the Ottoman Empire and is also widely used as an Islamic symbol and is found on the flags of many Islamic nations.

Countries with variations of the Star and Crescent on their national flags include, Turkey, Tunisia, Algeria, Azerbaijan, Pakistan, Malaysia, Singapore and Turkmenistan.

So why is it also the coat of arms of the City of Portsmouth and is there any connection with these other nation's use of the symbol? One possible theory is outlined below. 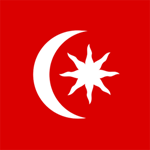 The star and crescent symbol was originally used as the flag of Constantinople. According to legend in 339 BC the city of Byzantium, (later known as Constantinople and then Istanbul), won a decisive battle under a brilliant waxing moon which they attributed to their patron Goddess Artemis (Diana in Roman mythology) whose symbol was the crescent moon.

In honour of Artemis the citizens adopted the crescent moon as their symbol. When the city became the Christian Roman Constantinople in 330 AD, Constantine also added the Virgin Mary's star on the flag.

The Turks conquered Constantinople (Istanbul) in 1453 and from that time adopted the Star and Crescent as their own flag. The Turkish (Ottoman) Empire were rulers of the Muslim world and due to this powerful influence, the Star and Crescent became synonymous to many, as a symbol of the Islamic faith as a whole.

The Star and Crescent symbol (hilal in Arabic) was used in mosques and minarets hence the association with Islam, however, not all Muslims recognise the star and crescent as an Islamic symbol, indeed Islam actually prohibits the making of religious symbols, therefore there is no specific symbol of Islam. The Star and Crescent though has been adopted and incorporated into the flags of many Islamic nations including Algeria, Azerbaijan, Libya, Malaysia, Mauritania, Northern Cyprus, Pakistan, the Western Saharan territory of Sahrawi Arab Democratic Republic, Turkey and Tunisia. 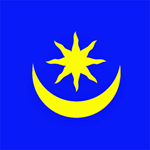 Isaac Comnenus was the last ruler of Cyprus before the Frankish conquest during the Third Crusade. He was a minor member of the Comnenus family, a great nephew of the Byzantine (Istanbul) Emperor Manuel I Comnenus (1143-1180) and a grandson of the Sebastocrator Isaac.

The coat of arms used by Issac Comnenus was a crescent moon and an eight pointed star on an azure background, adopted in relation with his family links to the Byzantine emperor. Emperor Manuel made Isaac governor of Isauria and the town of Tarsus in present-day eastern Turkey, where he started a war with the Armenians and was imprisoned by them.

When Isaac was released in 1185, he hired a troop of mercenaries and sailed to Cyprus. He presented falsified imperial letters that ordered the local administration to obey him in everything and established himself as ruler of the island.

In 1192 the fiancee and the sister of the English King Richard I Lionheart were shipwrecked on Cyprus and were taken captive by Isaac. In retaliation Richard conquered the island while on his way to Tyre.

Isaac Comnenus was taken prisoner near Cape St. Andreas on the Karpass Peninsula, the northernmost tip of the island. According to legend, Richard had promised Isaac not to put him into irons, so instead he kept him prisoner in chains of silver.

At this time Richard adopted the star and crescent symbol, which Issac Comnenus had been using, as his own. Isaac was turned over to the Knights of St. John, who kept him imprisoned in Margat near Tripoli until he was released in c. 1194. Alternatively it is possible that King Richard adopted the symbol as his own, in reference to his own nickname Richard the Lionheart. The star Regulus is a bright star seen in the constellation of Leo (the lion), it is one of the brightest stars in the night sky and is also known by the Arab name Qalb al-Asad, which means Heart of the Lion.

In 1194 it was King Richard I, Richard the Lionheart, who granted the Town of Portsmouth its first charter. The star and crescent symbol is also present on the seal of William de Longchamp, Bishop of Ely, who as Lord Chancellor to King Richard, was also involved in the granting of Portsmouth's charter.

It is believed that the Town of Portsmouth adapted the symbol to use as its coat of arms in tribute to King Richard, for his patronage in the granting of Town status. The Star and Crescent symbol is known to have been used by Mayors of Portsmouth from at least the seventeenth century and probably earlier from the middle ages.

The motto 'Heaven's Light Our Guide' was incorporated into the coat of arms in 1929, it is the same motto that was used by the Order of the Star of India and was used on Indian troopships which regularly travelled between Portsmouth and the East. 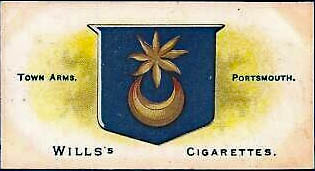 This cigarette card shows an example of the Star and Crescent as used in the Portsmouth Town Arms. It was was published by the Wills company in 1903 and is part of their series titled Borough Arms.

The text on the reverse of the card reads,
"An eight rayed star, or "estoile", within a crescent. The design recalls the national flag of Turkey, and the badge adopted by Richard I, John and Henry III at the time of the Crusades. 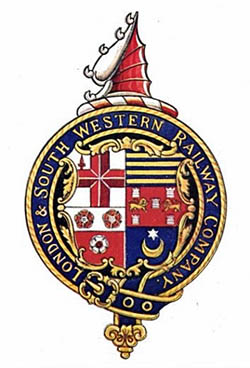 It is quartered on the arms of the London and South Western Railway Company."

The arms of the London and South Western Railway Company can be seen on the badge to the right, the Portsmouth coat of arms is shown in the lower, right hand quarter, directly next to the Southampton Coat of Arms, also served by the L&SWR.

The L&SWR began as a railway to link Southampton and London, but over time expanded further to provide services to towns such as Exeter, Plymouth, Ilfracombe, Bude and Padstow.

During this expansion it acquired or leased many other smaller railway companies, in 1923 the L&SWR was itself taken over and became part of the Southern Railway. 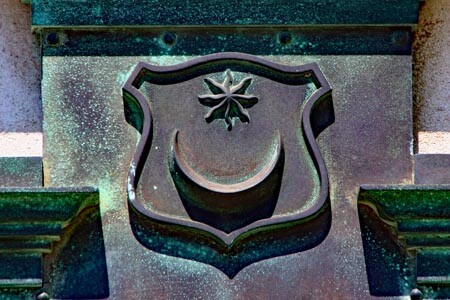 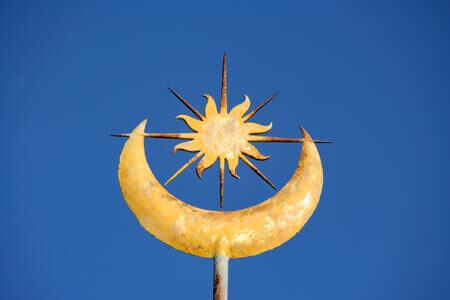