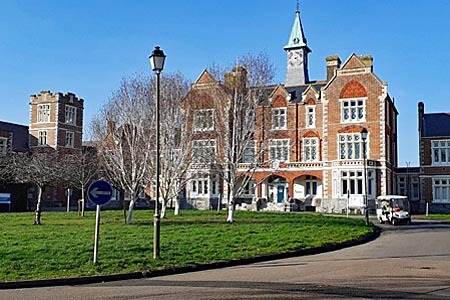 St.James' Hospital Portsmouth opened on 30th September 1879.
In 1875 Portsmouth Town Council made the decision to build a lunatic asylum in the town, at this time mental patients were sent to the Hampshire County Asylum at Knowle, or even as far as Camberwell to the asylum there. It was agreed that a local facility was needed, so 75 acres of land was purchased at a cost of £14,000, from Messrs Smith and Goldsmith, located between Eastney Lake and Velder Creek in Milton.

The architect Mr George Rake of Portsea was appointed to design the hospital, which was built in the Byzantine Gothic style using Fareham Brick, the building was faced with Plymouth stone.

The grounds of the hospital were left in a rough state, the plan being that the patients themselves would lay out, plant and tends to the grounds as part of their treatment.

The water supply at the hospital was deemed unsuitable so a new well was started in 1881 and was completed in 1884 this was capable of supplying 12,000 gallons / day. The water was stored in a large cistern of 60,000 gallons capacity under the laundry, from there it was pumped to a tank in the tower for general use and use in case of fire. 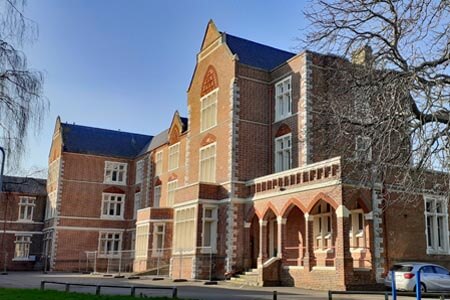 The hospital buildings included a dairy, laundry, brewery, shoe makers and tailors, as well as the farm, farm buildings and St James' Chapel.

The hospital rules stated that each nurse and servant was allowed to go out once every fortnight between 2pm until 9.45pm and every second Sunday from 4pm until 9.45pm. After 12 months good behaviour one weeks holiday would be given and after 2 years ten days holiday will be given.

The rules for government of the Borough of Portsmouth Lunatic Asylum were signed by the Mayor WD King on April 15th 1879 and approved by Mr Aston Cross one of the principal secretaries of state on the 14th October 1879.

The Committee of Visitors was formed by members of Portsmouth Council, this consisted of The Mayor WD King, Alderman Dore, Keat and Chambers and 14 councillors. They were responsible for the running of the asylum and would meet within 20 days after 20th December each year.

St James Hospital was used by the military in both the First and Second World Wars. In the First World War an American Hospital No.33 was set up in the grounds of St James to treat troops injured fighting in Europe. As well as the hospital facilities American troops used the gardens and grounds at St James whilst still recovering from their injuries and a baseball pitch was set up in the grounds for recreation.

During the Second World War casualties from the D-Day landings were treated at St James Hospital, the injured being landed at Portsmouth Dockyard and South Parade Pier in Southsea and subsequently transported by ambulance to the hospital for treatment.

During the 1980s and 1990s the NHS reformed it's approach to the treatment of mental health and many hospitals were closed in favour of a "Care in the Community" system, St James was one of these closures. The buildings, many of which are protected, were retained for community based facilities, although several of the villas were demolished due to their poor state of repair.

In 1995 a Tree Preservation Order (TPO) was made in order to protect the future of key trees on the site. Some land to the south of the hospital is now protected as a 'town green' under the commons registration act following a public inquiry in 2001. A town green is defined in the Commons Registration Act 1965, and was amended by the Countryside and Rights of Way Act 2000, and are now governed by the Commons Act 2006.

On 1st February 2021, St James' Hospital opened as a temporary Covid-19 vaccination centre, to facilitate the rollout of the UK vaccination programme. 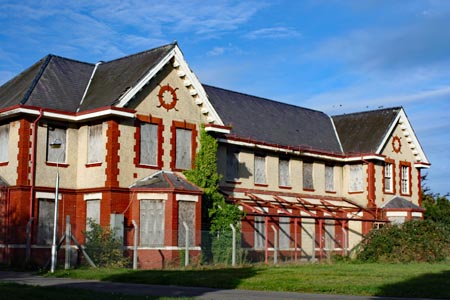 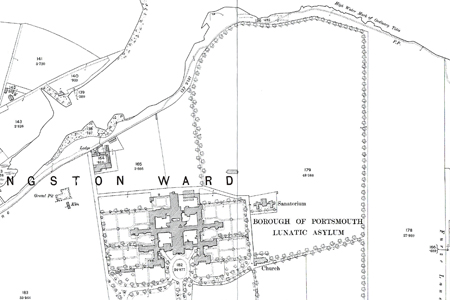