Discover the history of Portsmouth Airport 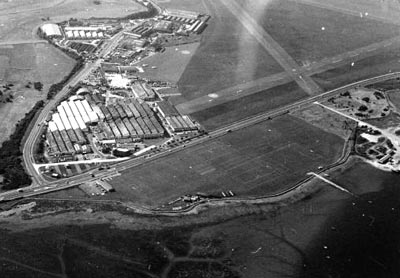 Portsmouth Airport used to be located just west of the Eastern Road in the area where Anchorage Park is situated now, it's not obvious but there are still some clues to be seen.

Originally conceived as a seaplane base in Langstone Harbour, a more conventional airfield was developed as Portsmouth Airport in 1930 on a 276 acre site with grass runways. The airport used the three runway triangular layout, see map below, this design ensured that there was always six different directions that aircraft could take off from. With slow take off speeds, early aircraft needed to take off into a headwind, thereby increasing the relative airspeed across the wings.

The land for Portsmouth Airport was purchased by the City in 1930 and the airport officially opened in 1932. However the first aircraft landed at the airport on the 14th December 1930, piloted by Flying Officer Al Mortimer.

At the opening on July 2nd 1932, approximately 50,000 people attended a flying display. The first services were run by Portsmouth, Southsea and Isle of Wight Aviation Co with services to Ryde, Isle of Wight. This was soon followed by International Airlines, Provincial Airlines and Jersey Airlines.

On August 20th 1936, two employees of Airspeed Ltd stole an Airspeed Courier aircraft, the pilot Joseph Smith had never flown before, he crashed the plane hitting a tree at the edge of the airfield, destroying the aircraft worth £3,400. Smith admitted that he and his accomplice, Arthur Gargett, planned to sell the Courier to the Spanish forces in the civil war. Smith was sentenced to four months in prison, however when Gargett died in hospital, he was also charged with manslaughter and recieved a further eight months in prison.

In September 1936 the England to Johannesburg Air Race started from Portsmouth Airport, 9 aircraft started and the race was won by Charles WA Scott and Giles Guthrie, the flight took 52 hours and 56 minutes. The Schlesinger Race named after Isidore William Schlesinger, was run to promote the Empire Exhibition in South Africa, Schlesinger provided £10,000 prize money which was divided into two prizes one a speed race and the other a handicap race. The race started at 29th September 1936 from Portsmouth Airport and Scott and Guthrie reached Rand Airport, Germiston, South Africa, on 1st October 1936 as they were the only competitors to complete the race, they won all of the prize money. Nine aircraft started the race and these are listed below:

Airspeed Ltd moved to Portsmouth Airport from York in 1933 and produced the Courier aircraft in their factory, this was followed by the Envoy and then the Oxford, during the 2nd World War production of the Oxford continued alongside the production of the Horsa glider. During the war, No 163 Gliding School was based at the airport, this moved to Gosport in 1946.

After the war Airspeed continued production of civilian aircraft at Portsmouth Airport, converting Oxfords into the Consul passenger aircraft. Airspeed was merged with De Havilland and production was reduced to aircraft components only, the factory was finally closed in the 1960's. 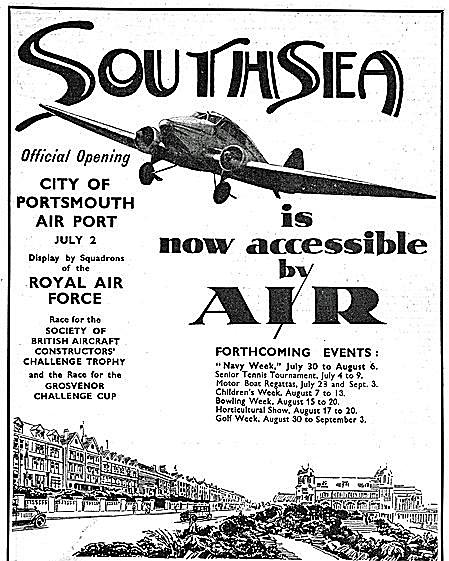 As aircraft grew in size and longer, tarmac runways were required, Portsmouth Airport became more limited to the aircraft that it could accommodate and as a consequence began to lose money.

On the 15th of August 1967, there were two crashes involving aircraft returning from Jersey, both planes were unable to stop on the wet grass runway. The first crashed into an embankment at the perimeter of the airport with no major injuries.

The second aircraft, also unable to stop, ended up on the Eastern Road which runs alongside the airport site, luckily only one woman had a leg injury and the plane avoided a collision with any cars on the busy road. The crash caused chaos to traffic, at that time there were only two roads onto Portsea Island, the Eastern Road, blocked by the crash and the A3 across Portsbridge.

In 1971 the decision was made by the Council to close the airport and the last official flight took place on 31 December 1973, however although the airport was now closed the Labour leader Harold Wilson flew into Portsmouth Airport seven weeks later to attend a meeting in the city.

In August 1980 a Country Music Festival was held at the empty Portsmouth Airport site, advertised as "Europes Biggest Ever Country Show" the event was held from the 8th to 10th August 1980. The lineup included Johnny Cash, Glen Campbell and Billie Jo Spears amongst others. Dolly Parton was due to perform but withdrew before the event. Although hailed as a success the festival failed to draw attendances large enough to be a financial success.

The area was eventually redeveloped for housing and industry, Anchorage Park now occupies some of the land, the rest is occupied by industrial and retail businesses. Portsmouth Aviation still have a facility at the site and the road running alongside the former airport is still named Airport Service Road. The map below shows the approximate positions of the grass runways at Portsmouth Airport overlaid onto the current Anchorage Park residential area.