History of the Solent Sea Forts 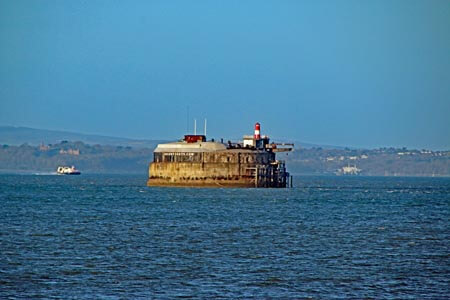 Situated in the Solent are the four Solent Sea Forts. Spit Bank Fort, Horse Sand Fort, St Helens Fort and No Mans Land Fort, built to protect the maritime access to Spithead and the entrance to Portsmouth Harbour. The forts were built in response to the threat of a French invasion under Napoleon and were commissioned by Lord Henry Palmerston, Prime Minister of the day, to protect Portsmouth Harbour from attack.

The eastern part of The Solent is very wide, however the majority of it is also quite shallow, sand banks protrude from Portsmouth and the Isle of Wight resulting in a very narrow deep water channel. The shoals at Horse Sand, Spit Bank and No Mans Land are covered by only 6 to 12 feet of water at low tide, therefore large ships must keep to the bouyed channels for safe passage. The forts were positioned to command these strategic shipping channels. The Solent Sea Forts were designed by Captain EH Steward, a member of staff of the Assistant Inspector General of Fortifications, Colonel WFD Jervois. The ironwork and shields were designed separately by Captain Inglis and Lieutenant English.

Work started in July 1861, but was temporarily suspended due to political reasons, work on the two larger forts resumed in 1865, Spit Bank Fort did not begin until March 1867.

Screw piles were sunk into the area around the site, these were used to support wooden staging that in turn supported huts for the workmen and a circular railway accommodating a steam crane.

Stone blocks were lowered onto the sea bed to act as foundations for the construction. The massive stones were transported from quarries by rail to a preparation area at Stokes Bay where they were trimmed to size, marked up and laid out as they would be in the final construction. From here they were moved to the construction site by barge. The steam crane was used to lower the stones into position on the sea bed, where divers ensured that they were correctly positioned. 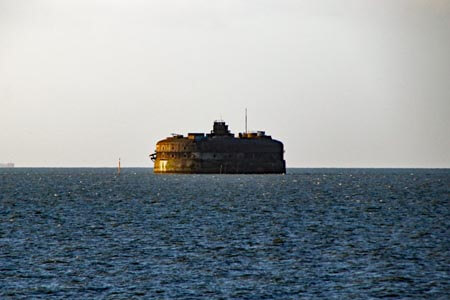 The interior was constructed of concrete blocks manufactured at Stokes Bay and then transported to the site by barge.

Construction of Spit Bank Fort was transferred to the War Department in January 1869 when the block work had reached the 14th course. The construction of an artesian well was approved in 1872 and boring began in May 1877, 18" cast iron tubing was used in the construction and water level was reached at 401 feet 4 inches.

Spitbank Fort was completed in June 1878 and the two outer forts in spring 1880.

The two outer forts Horse Sand Fort and No Mans Land Fort are almost identical to each other, being larger than Spit Bank Fort and have two gun floors each. Spit Bank Fort is approximately 2/3rds the size of the outer forts mentioned above and has only one floor and a basement. 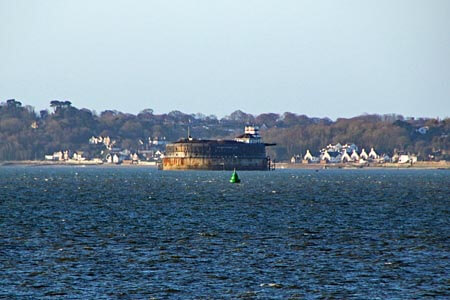 The armour used to protect the forts is 25" thick made up of a combination of alternate layers of wrought iron and 'iron concrete', in other places teak and wrought iron layers were used.

By 1909 the area between Horse Sands Fort and the coast at Southsea was protected by a line of concrete blocks, which can still be seen today at low tide. A similar line was also constructed between St Helens Fort and the Isle of Wight. These lines ensured that all shipping must pass between these two forts.

The Solent Sea Forts were never used in conflict against a French invasion force as intended by their design. During the 2nd world war the forts were armed with 6" guns, but were not large enough to house heavy anti aircraft guns.