A HISTORY OF PORTSMOUTH 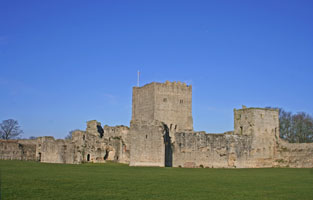 The history of Portsmouth has always been linked to its strategic importance and the sheltered natural harbour. The Romans used the harbour as a base when fighting pirates in the English Channel and of course it became the home of the Royal Navy.

The Romans were the first to appreciate the sheltered natural harbour at Portsmouth, in around 286 AD Carausius made Portchester at the top of the harbour his naval station. His mission was to clear the English Channel of Frankish and Saxon pirates. In 293 AD Carausius, who had declared himself Emperor of Britain, was murdered by Allectus. In 300 AD the Romans built the fortress, Portchester Castle, but by 400 AD the Romans had left the area.

The importance of Portsmouth as a strategic sea port was recognised by King Alfred the founder of the first English Navy. At the time Winchester was the preferred capital of England, so Hampshire was at the centre of national focus. During this period a military station would have been required close the mouth of Portsmouth Harbour to control access from the sea. In 897 King Alfred fought against a Danish fleet in the Solent, securing a great victory. Later the same year the British managed to capture 20 of the Danish raiders ships in the English Channel.

From the Norman conquest onwards the importance of Portsmouth continues to grow. The Normans developed Portchester Castle further, adding its great keep. Robert, Duke of Normandy, landed at Portsmouth in 1101, intending to invade England. He failed, it is believed that storms prevented the majority of his ships from arriving.

Henry sailed from Portsmouth more than once en route to Normandy and The Empress Matilda returning to England to claim her son's right to the English crown landed here.

King Richard sailed from Portsmouth on his way to the Crusades, and it was he who granted the town its earliest known charter. It was during Richard's reign that the Star and Crescent first appeared on the town arms, the title of Mayor of the town also appears at this time. An earlier charter is thought to have been granted by Henry I, but all trace of its existence has disappeared. King Richard's charter gave the right to hold a fair once a year, a weekly market, exemption from various tolls and the permission to try thieves caught within the borough.

Later King John renewed the charter and started the development of Portsmouth Dockyard, reinforcing the walls of the yard, to protect the Kings ships and had new buildings erected to house stores and equipment. 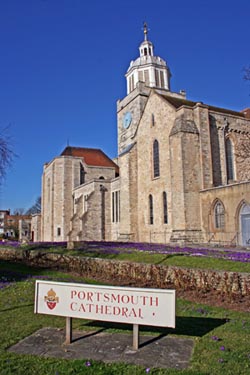 A wealthy Norman merchant, Jean de Gisor, effectively founded Portsmouth in 1180. He purchased the manor of Buckland, Portsmouth harbour providing a safe haven for his merchant ships and was an ideal location to trade with Normandy. It was Jean de Gisor who founded the Parish Church of Portsmouth in 1180, in honour of Thomas a Becket, who was famously murdered 10 years previously in Canterbury. The church is now known as St Thomas' Cathedral in the High Street, Old Portsmouth.

In 1229, Henry III extended the privileges granted by Richard, Portsmouth is now a town on a par with Winchester and Oxford, this charter established a Merchant Guild in the town. Henry III mustered his army and naval fleet at Portsmouth on three separate occasions for expeditions across the channel.

During the Hundred Years War Portsmouth was used for the embarkation of troops onto ships in the harbour and was often attacked by the French, being destroyed three times in 1337, 1369 and again in 1372. This probably accounts for there being so few buildings surviving from that period.

The fifteenth century was not a good period for Portsmouth. In 1445 Margaret of Anjou landed in the town on her way to marry Henry VI, the ceremony took place at Titchfield Abbey. Margaret played a major part in the Wars of the Roses, fighting to place her son Edward on the throne. In 1449 the starving and mutinous sailors at Portsmouth murdered Bishop Moleyns on Governors Green. The bishop had been sent to try and persuade the sailors to take a cut in their pay. As a punishment for his murder the town was excommunicated until 1508.

During the reign of Henry VII some work was carried out improving the fortifications around the harbour mouth, the Round Towers on both sides of the harbour were rebuilt and the Square Tower was built. But it was his son Henry VIII who really accelerated development in the area. He had coastal defences such as Southsea Castle, historical building in Portsmouth built, he expanded the dockyard and also had an iron chain installed across the harbour mouth, which could be raised to prevent the entry of enemy ships into the harbour.

In 1627 Portsmouth was granted yet another royal charter, by Charles I, laying out the principles of local government, the annual election of the Mayor and the power for the council to make and uphold local bylaws. This charter was supposed to have been surrendered in the reign of Charles II, but by some oversight this failed to happen, so the town reverted to the previous charter of Charles I and this continued to be in force until 1835 when the Municipal Corporations Act was introduced.

During the English Civil War (1642 - 1651) the Governor of Portsmouth, Colonel Goring, supported the king. The town was put under siege by Parliamentary forces for a month until Goring was forced to surrender.

Charles II undertook a wide range of improvement works in the area. The building at Gunwharf started, the shores around the harbour were raised and fortifications and defences were strengthened. On May 14th 1662 Catherine of Braganza landed at Portsmouth and was married to Charles II on May 22nd at the Domus Dei, then the governors house. The register of the marriage is held at St Thomas' cathedral.

In 1668 Peter the Great of Russia visited the town to attend a review of the fleet at Spithead, held in his honor.

The 18th century was a period of continuous growth for Portsmouth. New barracks and garrison were built, the town and the dockyard expanded, the growth of the town being directly linked to the expansion and growth of the navy itself. In 1772 Dr William Smith bequeathed a farm at East Standen on the Isle of Wight to support a Grammar School in the town. The school was originally in Penny Street, Old Portsmouth.

King George III (1738 - 1820) visited the town on three occasions, addressing the Corporation he described Portsmouth as "the glory and bulwark of these kingdoms." 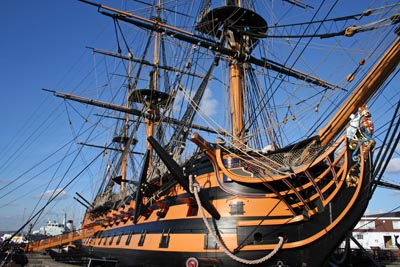 Nelson paid his last visit to Portsmouth on the 14th September 1805, spending the night at the George Inn in the High Street. Such was Nelsons popularity that he climbed out of the back window of the inn to avoid the crowds, making his way to Southsea beach near Clarence Pier, where he was taken to HMS Victory. Nelson died at the Battle of Trafalgar 21st October 1805, shot by musket fire from the French ship Redoutable.

Charles Dickens the English novelist and writer, was born in Portsmouth on 7th February 1812, at 1 Mile End Terrace, Landport, Portsea. Many other famous people from all walks of life were born or lived in Portsmouth, you can read about them in our Portsmouth Hall of Fame.

Queen Victoria (1819 - 1901) reviewed the first fleet review at Spithead in 1853, to include steam powered naval ships, eleven screw and nine paddle steamers were present. HMS Duke of Wellington, which was armed with 131 guns, 1100 men, 780 horse power and displacing 3,750 tons was the most powerful battleship at the review and at the time, in the world.

As artillery technology advanced and naval guns became ever more powerful and accurate, this in turn drove changes in both the Royal Navy and in the development of Portsmouth. Wooden hulled warships gave way to steel hulled armoured vessels and the old fortifications designed to defend the town of Portsmouth became obsolete. A string of new forts were built along the ridge of Portsdown Hill and in The Solent itself and the decision was made to demolish the town's fortifications in 1860. By 1879 the fortifications had all been demolished, except at the sea front and some around the harbour, changing the look and feel of the town forever.

As the defensive walls around what is now known as Old Portsmouth were removed, the town began to merge into a much larger Portsmouth which had been growing rapidly around it for the last 50 years. The population spread east into Southsea, areas of marshland in Southsea such as the Great Morass were drained in the early 19th century.

The architect and developer Thomas Ellis Owen was instrumental in the development of Southsea building fashionable 'Villa Suburbs' in the Kent Road, Queens Crescent and Merton Road areas.

Further residential development spread north, almost to the edges of the island, swallowing up farms and open spaces along the way. The new town hall (now Portsmouth Guildhall) opened in 1890, the Church of Kingston (St Mary's Church) was built in 1887 with financial support of Mr W.H Smith the First Lord of the Admiralty and the new Municipal College (now part of the University of Portsmouth) was opened in 1908.

In 1926 Portsmouth was granted city status following a long campaign by the Borough Council and in 1928 the city was granted Lord Mayoralty. In 1929 the city council added the motto "Heaven's Light Our Guide" to the Coat of Arms.

Portsmouth was extensively damaged by aerial bombing during the World War II, due to it's military importance. The German bombing campaign known as The Blitz continued from July 1940 until May 1944, three of these attacks being classified as major and many major landmarks were destroyed and thousands of residential homes were destroyed or damaged. Read more detail about the the Blitz in Portsmouth here. 930 people were killed and many more were wounded.

Following the war much of the city's damaged housing stock was demolished and cleared, many displaced residents were moved to new developments such as Paulsgrove and Leigh Park, built on land purchased by the City Council in areas to the north of Portsea Island.

Portsmouth continues to evolve with redevelopments such as the Pompey Centre at Fratton goods yard and Gunwharf Quays at the former HMS Vernon site. Future developments planned include the Northern Quarter redevelopment of the retail area to the north of Commercial Road and the regeneration of land in the Tipner area to provide new homes, jobs and green spaces.