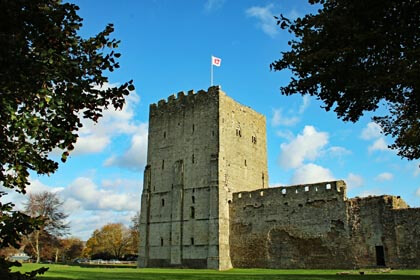 Portchester Castle stands at the head of Portsmouth Harbour and is one of the best preserved examples of a Roman fortress in the UK.

The earliest reliable evidence of a fort at Portchester is in the late third century, there are some traces of a first century settlement but there is no documentary evidence to support this.

The walls and defensive towers (bastions) which form the the outer courtyard (bailey) of Portchester Castle, are the remains of a large fort built during the last quarter of the third century.

At that time the northern provinces of the Roman Empire were threatened by pirates and barbarian forces, so a coastal defensive position was required.

In AD 285 Carausius was given command of the fleet to clear the sea of barbarian raiders, he realised the importance of Britain and seized power, but his rule was short lived as he was assassinated in AD293. Coins found at Portchester Castle suggest that it was built after AD260-268 approximately at the start of Carausius' campaign against the raiders.

The fort walls defended by twenty bastions enclosed an area of 8.5 acres and were surrounded by a double ditch. After its initial use, the fort doesn't appear to have been occupied on a regular basis until the end of the century. In AD904 Portchester Castle became the property of King Edward the Elder, the fort was then used as a defensive base to help protect Wessex from Viking attacks.

By 1086 Portchester Castle was granted to William Mauduit a Norman supporter of King William. By the time of Mauduit's death in 1100 the inner bailey had been constructed, the landgate rebuilt and the first phase of the keep as a single storey structure took place. The keep was expanded to a two storey building in the early part of the twelfth century by Williams son Robert. Robert was drowned in 1120 and the castle reverted to the crown.

William Pont de l'Arche, the sheriff of Hampshire acquired Portchester Castle along with Robert Mauduits daughter in about 1130. He founded a priory at the castle in approximately 1128. The canons of the priory later moved to a new site at Southwick around 1148. William Pont de l'Arche died at about 1148 and the castle seems to have passed through several hands until returning to the crown in about 1158.

Portchester Castle was used for the shipping of bullion to Normandy in 1163-4, Henry II stayed at the castle on several occasions. In 1173 Henry's son the 'Young King' rebelled against his father and the castle was armed and repaired, a garrison of knights were stationed at the castle. A considerable amount of building took place at this time including two single storey buildings on the western side, a hall at the northern side and a single storey range next to the gatehouse. After this building work was completed by about 1181, very little was then changed for the next century.

King Richard came to Portsmouth and Portchester Castle on his two visits to England, he had the castle further fortified when it was feared that his brother John might invade England. When he became King, John often stayed at Portchester, he was at the castle when Normandy was lost in 1204. The French army captured Portchester and Chichester in 1215 with no resistance.

In a survey of Portchester Castle in 1275, it is described as old and ruinous, unsuitable for habitation. During the Hundred Years War in the 14th century, the castle was constantly refurbished and the defences upgraded in fear of attack from the English Channel. Edward III stayed at the castle whilst assembling his army of 15,000 men, before embarking to victory at Crecy. 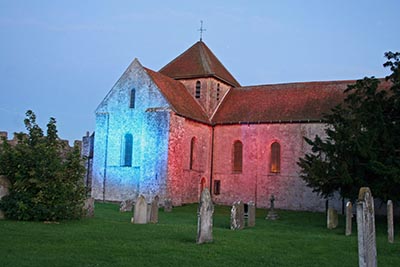 Located inside the Portchester Castle walls is St Mary's Church, an Anglican church built as an Augustinian Priory in the 1120's.

Built in the Norman style the Priory would have occupied a larger area than the existing church, having outbuildings such as a refrectory and dormitory.

The church houses many interesting historic artefacts such as Norman carvings, a twelfth century font, an Elizabethan wall panel and a Victorian pulpit.

St Mary's church at Portchester Castle is open between 9am and 4pm in the winter and 9am and 6pm in the summer, guide books are available in the church. 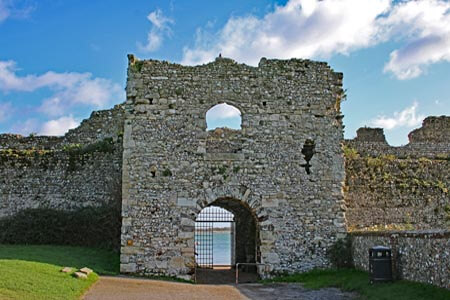 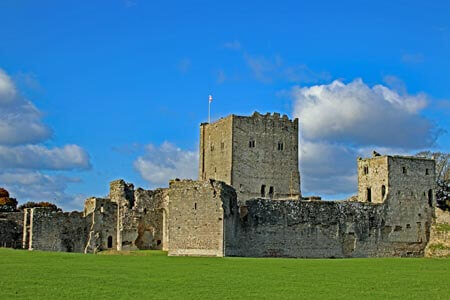