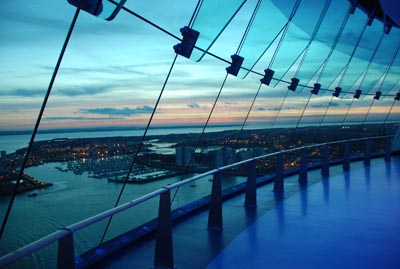 The Spinnaker Tower, Portsmouth which opened in October 2005, is situated on the edge of Portsmouth Harbour on the waterfront of the Gunwharf Quays Shopping development. It is higher than the London Eye, Blackpool Tower and Big Ben and at 170m is one of the tallest publicly accessible structures in the UK, outside of London.

The Spinnaker Tower was originally conceived as part of the Millennium projects, intended to celebrate the move into the new Millennium in the year 2000.

Portsmouth applied for a lottery grant for a range of projects as part of the Portsmouth Harbour regeneration scheme with the tower as its focal point. In 1995 the project was awarded a lottery grant of £38 million towards the project. Three different designs for the tower were proposed the Spinnaker design, a tripod design intended to emulate ship funnels and a twin tower design holding a large glass globe at the top.

The final decision of the choice of design was given to the residents of Portsmouth, exhibitions were held in various locations around the area, with visitors being able to cast their vote, 13,000 people attended and voted at these exhibitions, with more than 60% favouring the Spinnaker Tower design.

CONSTRUCTION OF THE SPINNAKER TOWER

Work on the construction of the Spinnaker Tower began in November 2001 with a concrete dam built as protection of the site from the sea, then 84, 1m square piles were driven into the seabed that form the foundations for the tower.

The legs of the tower, constructed out of steel reinforced concrete, were formed using a process known as slip forming. The slip form tooling was built in Austria, it involves the use of hydraulic cylinders which control the wooden shuttering and allow continuous concrete pouring, the tower legs were completed in September 2003. 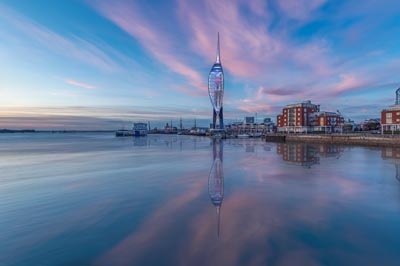 The supporting pre fabricated steelwork for the spinnaker was assembled on site, in the very restricted space available at the tower base and was lifted into position during March 2004. The remainder of the spinnaker steelwork was then assembled and lifted into position by crane, this process continued until the summer of 2004,finally the tower was painted, by hand, by workers often using abseiling techniques to access the tower exterior.

In January 2005 the top section of the tower was assembled, this part of the Spinnaker Tower is constructed as a tubular steel frame, coated in glass reinforced plastic. Shortly after this the tower crane used throughout the build was removed.

The tower opened for business in October 2005, offering panoramic views across Portsmouth Harbour, across the Solent to the Isle of Wight and far beyond.The viewing distances on a clear day are up to 23 miles. The Spinnaker Tower has three viewing decks.

THE SPINNAKER TOWER AT PORTSMOUTH HARBOUR 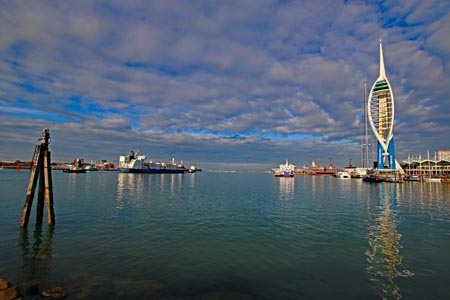