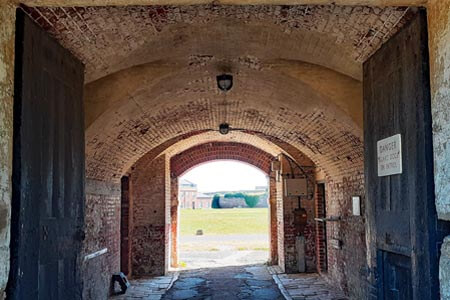 Hidden away on the peninsular at Eastney in Portsmouth is the historic Fort Cumberland a pentagonal military fortification overseen by English Heritage.

The present fort was built between 1785 and 1810 by the Duke of Richmond to defend the entrance to Langstone Harbour, it replaced an earlier fort built by the Duke of Cumberland who it is named after in 1747. It is a scheduled monument and a Grade II* listed building.

The fort is not open for the public to visit, but it is home to some businesses such as the Portsmouth Distillery Company an artisan Gin and Rum producer. You can visit the distillery and purchase Gin, Rum and other products directly from the distillery. The site is also home to Forgotten Veterans UK and the Nautical Archaeology Society.

Built right on the tip of the peninsular at Eastney, Fort Cumberland was positioned to command the entrance to Langstone Harbour to the east of Portsea Island, the fear was that an attacking force could sail into Langstone Harbour and then attack the Portsmouth Dockyard overland by crossing the island.

The fort is built to a pentagonal bastion design allowing the maximum lines of fire for the defending troops form the triangular ravelins.

The fort was completely rebuilt in 1782 from masonry and brickwork, this is what can be seen today, it is said to be the most impressive example of an 18th century military fort in existence in England.

During the reconstruction work, started in 1785, all traces of the original fort were lost apart from the guard house and store room.

Fort Cumberland was transferred from the War Department and came under the command of Board of Admiralty in 1858, in 1859 it became the HQ of the Royal Marine Artillery.

The fort has served a wide range of military uses, it was home to the Royal Marine Artillery howitzer and anti aircraft brigade, as a base for the Royal Marine Mobile Naval Base Defence Organisation and later as an inter service training centre. 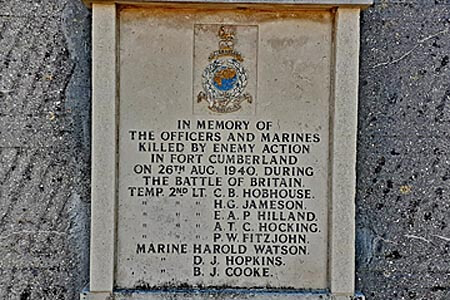 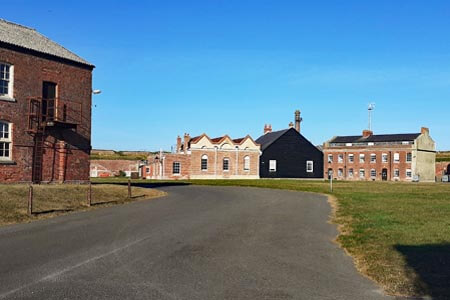 During the Second World War Fort Cumberland was attacked during a German air raid, unfortunately eight Royal Marines were killed in the raid, a memorial stone can be seen at the main entrance and in the image above.

The fort is now used as a base by English Heritage for it's archaeological team, the Ancient Monuments Laboratory are also based here.