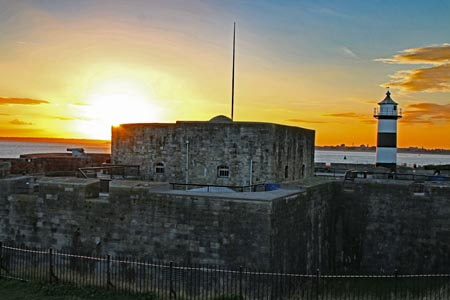 Southsea Castle was built by Henry VIII between 1544 and 1545 as part of the coastal defence to protect Portsmouth against possible French invasion.

Its revolutionary design provided for the most efficient use of guns in attack or defence at a time when artillery started to dominate warfare. John Chaderton was responsible for the construction of Southsea Castle and was assisted by the architect and engineer Anthony Knyvet.

Southsea Castle was constructed on a highly strategic point of the coast, due to the position of the sea channels at this point, no substantial ships or vessels, can approach the mouth of Portsmouth harbour without passing very close to the castle, where they could easily be fired upon by the artillery stationed there.

Henry's Tudor warship the Mary Rose, housed in the Historic Dockyard, was sunk in the waters of the Solent just in front of Southsea Castle in 1545, the ship was recovered from the seabed in 1982 and is now on display at Portsmouth Historic Dockyard. 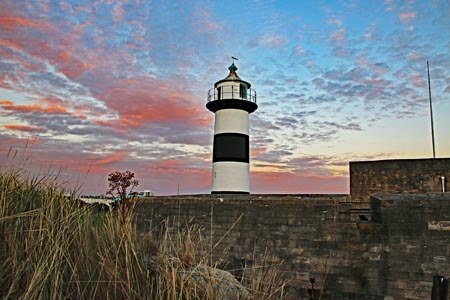 Southsea Castle was extended during the reign of Charles II and it is his coat of arms that can be seen carved above the main gate. Charles employed the Dutch engineer Sir Bernard de Gomme to oversee the redevelopment work and elaborate earthworks were added in addition to a glacis and a covered way. A glacis is an artificial slope of earth used in late European fortresses constructed to keep any potential assailant under the fire of the defenders until the last possible moment.

Southsea Castle had a troubled history, in 1626 it was badly damaged by fire, in panic several ships moored nearby tried to get away from the fire, fearing explosions, and ran themselves aground in the shallows. Ironically at this time the castle had not yet been equipped with guns or gunpowder, so the risk was quite minimal. The fire destroyed all of the timber built buildings within the castle, used to house the officers and soldiers stationed there. As Charles I was in conflict with Parliament at the time, he was unable to raise funds for the repairs required. Captains of Southsea Castle were constantly pleading for funds to be made available to repair the castle and properly equipped to bring it back up to strength.

In March of 1640, another fire broke out at the castle causing further damage and destroying lodging rooms and store rooms for ammunition and provisions. 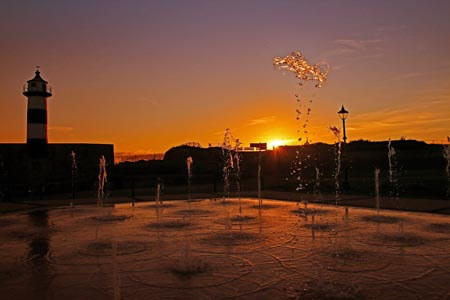 At the start of the Civil War the Southsea Castle was still under strength and was easily taken by Parliamentary forces. Observing that most of the castles guns were positioned on the landward side, the Parliamentary soldiers climbed the wall on the seaward side and were able to take the castle, under the command of Captain Challoner, without a single loss of life. Read more about the Civil War period here the Siege of Portsmouth.

Disaster again hit the castle in 1759, the Duke of Richmond and his regiment were camped on Southsea Common and had been given permission to store their ammunition and gun powder at the castle. Women were cooking in the room above the munition store and embers from the fire fell through the gaps in the floorboards causing an explosion. 17 men women and children were killed. Following this accident, ammunition was never stored at the castle again, being kept instead at a second building on the common known as the Firebarn.

In 1814 Southsea Castle was modernised reflecting new ideas of fortification. At the request of the Admiralty, the lighthouse was erected near the west bastion in 1820 Additional gun batteries were added to the east and the west flanks some 40 years later, a brick wall with loopholes was erected on the landward side to give some protection from these batteries being over run. In the 19th century a tunnel was built to defend the castle moat. Visitors can still enter the tunnel and see how the castle would have been defended against invaders. By the 1950s, modern weapons had rendered coastal artillery obsolete and Southsea Castle was subsequently purchased by the City Council in 1960. The castle was opened to the public for the first time in 1967. 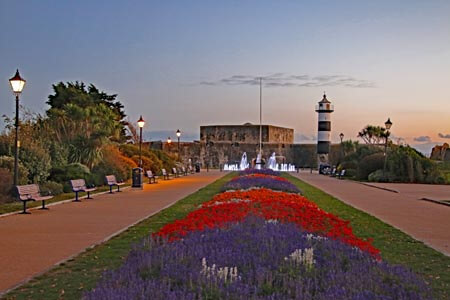 Southsea Castle houses a small museum, spread over several floors of the keep and the rooftop of the keep provides excellent views across the Solent towards the Isle of Wight.

Located within the castle buildings is the excellent Courtyard Restaurant a family run restaurant that focuses on rustic, homemade and seasonal food. The Courtyard is open from 09.30 - 17.00 and can also be booked for private events.

During the winter of 2017 - 2018 the area around Southsea Castle entrance was greatly improved. The existing pond and fountain was removed and replaced with an exciting new water feature consisting of 30 water jets, each of which has a coloured lamp at it's base. The jets and lamps can be programmed to create different displays and effects. During the hot summer months this feature has proved very popular with children, and some older folk, enjoying the cooling waters.

Southsea Castle has become an increasingly popular venue for weddings, wedding receptions and other private events.

Parking: The closest car park is the D-Day Story Museum Car Park, which is just a short walk away from the castle, this is also a coach park.