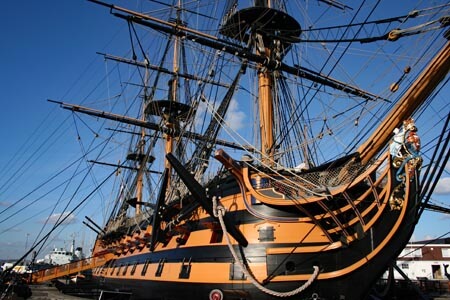 Press gangs were groups of soldiers or sailors sent out to enforce naval or military service on able bodied but unwilling men, often by violent coercion.

The practice of impressment (also known as Shanghai-ing or crimping) was common in all the world's ports until about 1820, and was widely used by Britain's Royal Navy as a means to maintain crew numbers on its warships.

Press gangs were used by the Royal Navy as a crude and violent method of recruiting seamen into naval service, often against their will.

Recruiting sailors purely voluntarily was difficult as the conditions on board ship were poor and serving in the navy, especially at times of war, was very dangerous.

The word press gangs derives from the term impressment, which can be defined as, the act of coercing someone into government service. Impressment was used from as early as Elizabethan times and was last used during the Napoleonic wars 1803-1815.

The press gang, a group of 10 - 12 men, led by an officer, would roam the streets looking for likely 'volunteers', merchant seamen were particularly prized as they already had seagoing experience and needed less training. 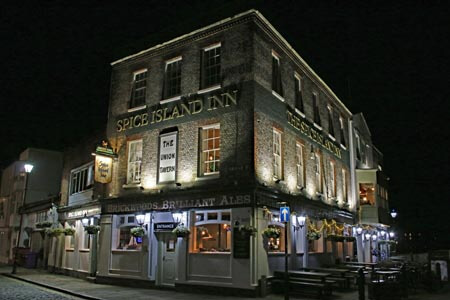 The area of Spice Island, in Old Portsmouth, seems to have been a favourite recruiting area due to the large number of pubs, hostelries and other establishments that existed there.

Certain groups were exempt from the impressment process, apprentices were exempt. Officially foreigners could not be impressed, although they could be persuaded to volunteer and there was an age limit 18 to 55 years. But the rules were often ignored so that the press gang could earn their reward, they were paid by the head.

Often men were knocked unconscious or threatened and often violent fights broke out as groups tried to prevent friends or work mates being impressed into service.

Impressment was legalised during the reign of Queen Elizabeth, but had been in common practice as far back as the 13th century for the recruitment of soldiers. Queen Elizabeth passed an act in 1563 laying out the use of sailors forced to join the Royal navy. In 1597 a further act allowed vagrants to be forced into naval service.

When the press gang had seized a man, he was offered the King's shilling as a reward for volunteering, but often the coin was issued in devious and underhand ways, such as slipping the shilling into a pocket, or dropping it into his drink. If you were in possession of the shilling then that was good enough for the press gang. It is for this reason that glass bottomed tankards became popular, so that you could check your drink didn't contain a shilling before drinking it.

Not surprisingly corruption was rife, many wealthier men escaped impressment by simply bribing the press gang, other men would play the dangerous game of taking the King's shilling and then running away and repeating the act elsewhere.

Often impressment took place at sea where press gangs would board merchant ships with captured sailors being pressed into service, leaving the merchant vessel dangerously under manned to continue on its journey.

New laws were enacted in 1835 reaffirmed that impressment to the Royal Navy was a legal practice, but limiting the length of service to 5 years and limiting stating that a man could only be pressed into service once.

After 1853 the need for press gangs diminished, at this time the navy introduced continuous service for sailors with a more structured career and a pension on retirement, this led to more men joining on a voluntary basis and reduced the need for impressment.