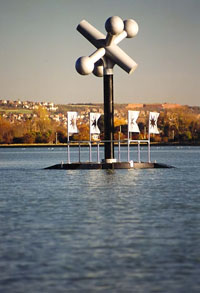 Richard Farrington has two large sulptures on display in the Portsmouth area, The Jackstar that floats in Tipner Lake off the west coast of Portsea Island and the Whales Tail at Gunwharf Quays.

The sculpture was part of the Portsmouth Millenium Gateway Project that was managed by Ron Tate of the City Council and funded by Onyx Environmental. It is visible from the M275 going into the city along with the Sails of the South and additions to the bridge.

Consent for Planning Permission was given by the City council, the Environment Agency, MAFF and DETR.

Many others were also involved, with the installation work being organised by Steve Tebb of the Marine Engineering Dept, who is now sadly no longer with us.

The plastic floats were manufactured at IEP in Liphook and the Jack itself weighing in at around 600kg and 3300mm long at FLM in Ashton-u-Lyne.

The installation by Baker Trait went well early in 2001 with them driving the pile six meters into the mud of the deep channel in the lake.

Damage to the float that rises and falls with the tides on the pile is attributed to 'break aways', boats from the ship breakers yard that have the habit of floating off.

The original brief requested that an artist should design a bird roost to replace land that had been absorbed in one of the Onyx waste disposal areas to accommodate migrating seabirds and Brent geese.

The Jack was made out of mild steel and zinc sprayed and laquered and was chosen for several reasons; sailors, navigation, the stars and birds.

The steel flags with their stars refer to the city crest and it may even relate to Noah and his doves. Or was it the fact that Irish monks followed skeins of geese to find northern lands or is it a monument to Sgt Jack Guterman DFC and his crew of 617 squadron who perished on the dams raid, (Operation Chastise) in May 1943.

The sculpture was commissioned by Berkeley Homes (Hampshire) Ltd for the land owner Land Securities and arose from a competition organised by Liz Simes of RPS Chandlers Ford who designed the hard landscaping at Gunwharf Quays. 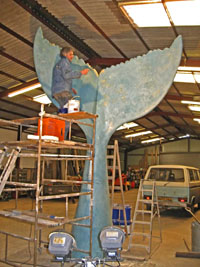 It was project managed by Claire Looney of Portsmouth CC and cast by the Bronze Age Foundry in Limehouse.

The creation in bronze of a whales tail for the plaza in front of No 1 Gunwharf Quays, Portsmouth was in part inspired by a conversation with fellow sculptor competitor and friend, Charlie Carter. To date this is the project that has taken the longest time to realise having first won the competition in 2003.

Work on the full scale model began in November 2006 and was completed by May 2007.

It was then moulded and cast and finally positioned in March 2008 amidst a mele of invited guests, members of the public, Berkeleys people and the Mayor and Mayoress of Portsmouth who opened it to the public.

The idea was chosen as it represented something of the nautical heritage and history of the area being essentially about the perils of the deep and a metaphor for the almost migratory life of sailors. It is located on The Plaza at Gunwharf Quays in Portsmouth.