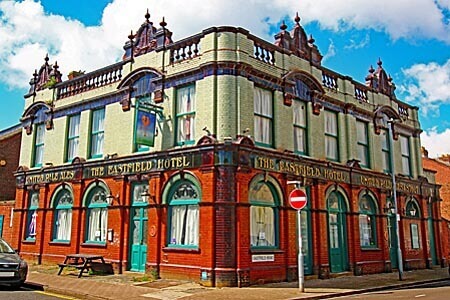 Arthur Edward Cogswell was a prominent architect and draughtsman in the Portsmouth and Southsea areas and he is responsible for many of the iconic landmark buildings which can still be seen around the city today, if you know where to look. In contrast to Thomas Ellis Owen, whose work was mainly in the development of Southsea, Cogswell's buildings can be found all across the city of Portsmouth and Southsea.

Arthur Edward Cogswell was born in Peterborough, Cambridgeshire, in 1858 it is believed that his father worked as a woodcarver, the family lived at 13 St Pauls Square in Peterborough.

A.E Cogswell moved to Portsmouth in the 1870's and began an apprenticeship with George Rake an important Victorian architect who had previously worked with T.E Owen. Rake had a thriving business with offices in Portsea and London and he is responsible for buildings such as St James' Hospital in Milton and the buildings at Kingston Cemetery.

Cogswell is sometimes described as Rake's star apprentice and went on to become a partner in the business which in time changed it's name to Rake and Cogswell. During his time as an apprentice Cogswell worked on many of Rake's major projects such as Kingston Gaol (prison) at the corner of St Mary's Road and Milton Road and also St James' Hospital on Locksway Road.

A.E Cogswell was responsible for a wide range of institutional buildings in Portsmouth and Southsea such as banks, churches, cinemas, schools, theatres and the Carnegie Library in Fratton Road. He is probably best remembered for the more than twenty ornately decorated pubs that he designed for Brickwoods Brewery and Portsmouth United Breweries. These include the Coach and Horses at Hilsea, the Graham Arms at George Street, the Eastfield Hotel in Eastney and The Florist on Fratton Road.

Unfortunately many of the building designed by Cogswell were destroyed, some during The Blitz of the Second World War and others in the course of urban redevelopment. Buildings demolished for redevelopment include The Evening News building in Stanhope Road and Portsmouth Water Company building, in Commercial Road.

Cogswell was a Freemason and one of his fellow masons was John Brickwood of Brickwood's Brewery. Brickwoods was a major brewery in Portsmouth the brewery having several homes as the company grew, Hyde Park Brewery, Hyde Park Road, Southsea in 1880, Portsmouth Brewery, Penny Street in 1887 and the Portsmouth Brewery at Catherine Row, Portsea in 1902. 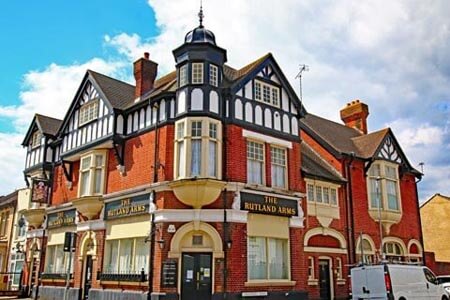 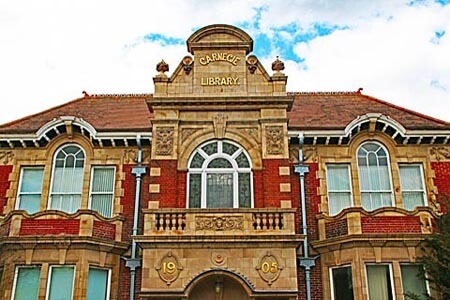 Through his association with John Brickwood, Cogswell was commissioned to design a number of pubs as already mentioned, Branksmere the Brickwood's family home in Queens Crescent, Southsea and the original South Stand, originally known as the Grand Stand, at Fratton Park football ground. John Brickwood was the chairman of the syndicate which formed Portsmouth Football Club in 1898. Cogswell also designed the pub known as The Pompey in Frogmore Road next to Fratton Park. Cogwell's original stand was demolished to accommodate a larger one built by Archibald Leitch. However some of the original mock Tudor club pavilion can still be seen today. 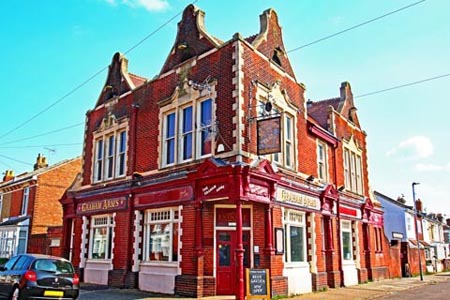 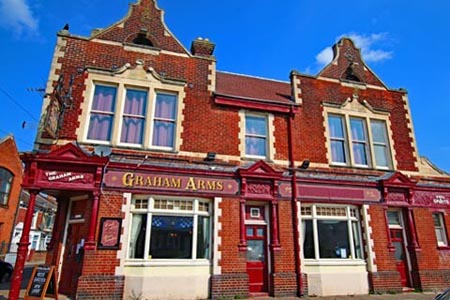 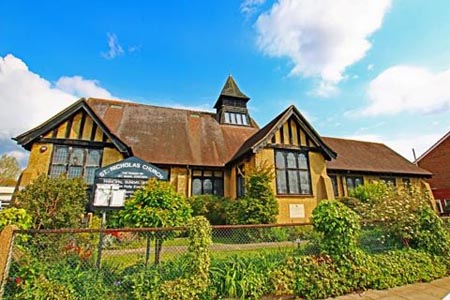 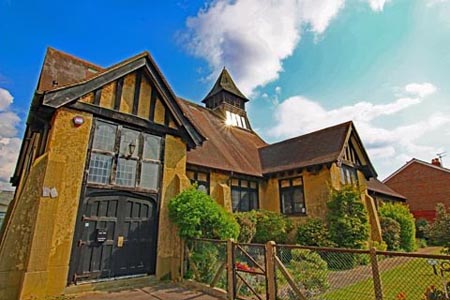 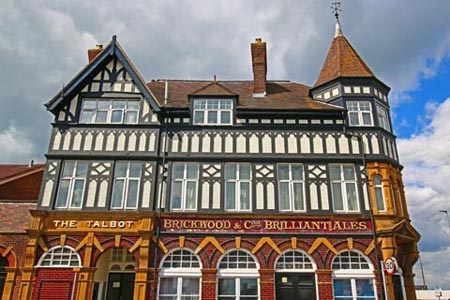 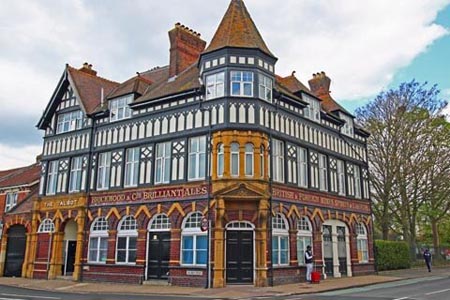 Some of Cogwell's buildings that still exist are listed below.

As well as the pubs and other building already mentioned, Cogswell was responsible for the design of three local cinemas, the New Classic Cinema on Kingston Road, North End this later became a snooker hall, the Gaiety Cinema in Gosport and the Palace Cinema at Guildhall Walk. The Palace Cinema building in Guildhall Walk has a distinctly oriental looking facade with it's impressive looking roof towers.

Aurthur Cogswell died in October 1934 aged 76, he is buried with his wife Flora at Christ Church, Portsdown, Widley. Following his death his two sons Victor Cogswell and Douglas Cogswell carried on the family business then known as AE Cogswell & Sons. 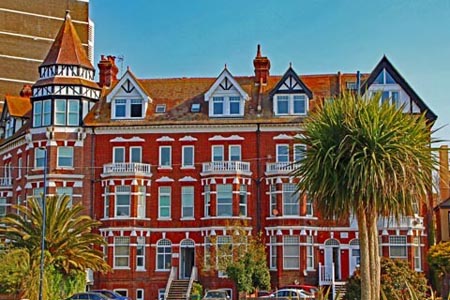 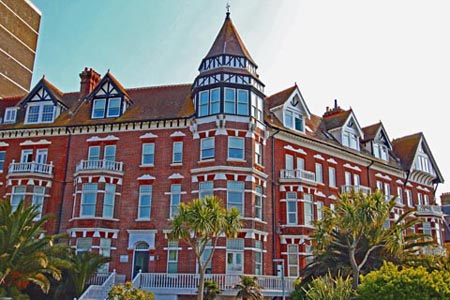 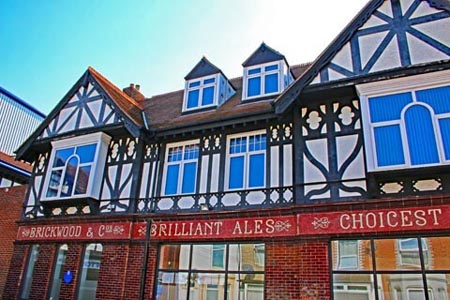 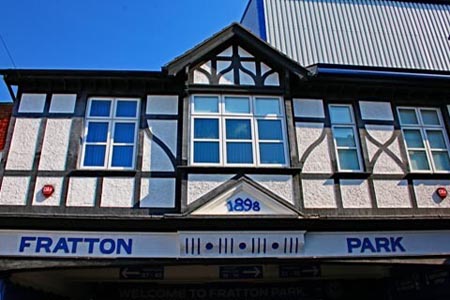 THE COACH AND HORSES, HILSEA 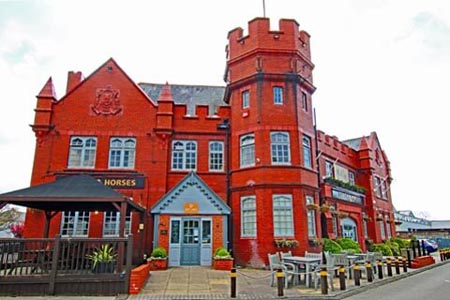 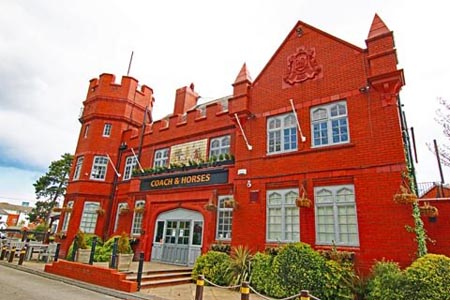 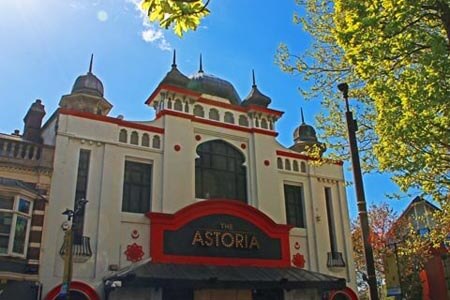 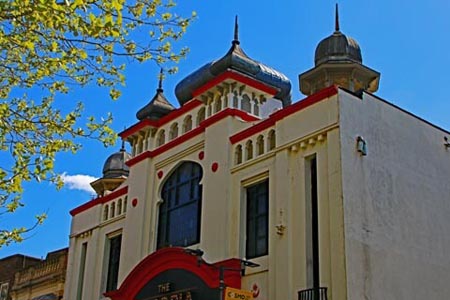 The former Palace Cinema, designed by A.E Cogswell and built by Frank Privett is located at the end of Guildhall Walk, which was originally the end of Commercial Road, the road was renamed when the area was redeveloped in the 1970's when the Civic Offices were built.

Cogswell's elaborate design of the front of the building is in an Indian Moghul design, on the roof there is a large central dome which is then flanked by smaller domes, all with pinnacles protruding upwards. In the centre of the facade is a large window which is topped by an Islamic arched design, this theme is continued with a series of small arches running along the top of the building.

The interior of the cinema was also unusual as the projection screen was at the front of the building rather that the rear, so customers entered the auditorium from behind the screen.

The Palace Cinema opened on 21st February 1921, it was described as 'one of the most opulent of local picture palaces' by the Mayor John Timpson. The cinema eventually closed in 1982 and was converted into a night club The Astoria.