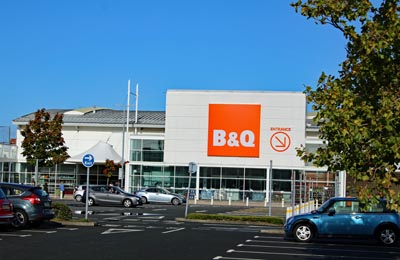 The Pompey Centre, is a medium size, city centre retail park, it is home to a variety of retail businesses including DIY, fast food outlets, building supplies and a car service centre.

Businesses located at the Pompey Centre include a B&Q Warehouse the largest B&Q store in the UK, Tesco Extra supermarket, Safestore Self Storage, Better Gym, KFC drive-thru restaurant and a McDonalds drive-thru. Other retail businesses include tiles and tiling supplies, electrical components, bathroom and plumbing supplies, furniture and auto spares and servicing. The Sunnyside GP Surgery is located on the east side of The Pompey Centre and has a dispensing pharmacy located next door.

There is also a Hotel at the Pompey Centre, the Ibis Hotel offering budget priced rooms, right next to Fratton Park.
Book direct with Etap, get internet rates.

NHS SERVICES AT THE POMPEY CENTRE:

The Pompey Centre is home to several fast food businesses including: 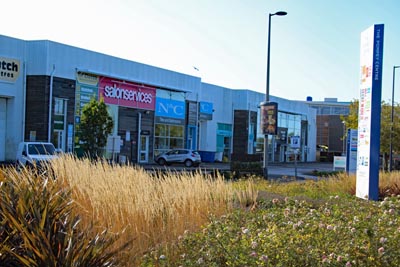 The former Railway Goods Yard at Fratton had been under used for a number of years as rail maintenance work had been moved away from Fratton, the freight depot and coal merchant site had been used as a lorry park. The carriage sheds alongside to Goldsmith Avenue were retained however, as they are part of the Railtrack Traincare Depot.

The Fratton Goods Yard site, approximately 12 hectares (30 acres), was bought in March 1999 by the Sellar Property Group from Railtrack and in conjunction with Portsmouth Football Club, a planning proposal was raised for the development of The Pompey Centre. The plan included a new link road between Rodney Road and Goldsmith Avenue, 18,300m² of non-food retail / warehousing space, 15,000m² of office / warehousing space, fast food retail space and car parking space. Planning permission was granted in 2000 and construction of The Pompey Centre began in 2002, the parts of the goods yard polluted with coal dust required de-contamination before construction could start.