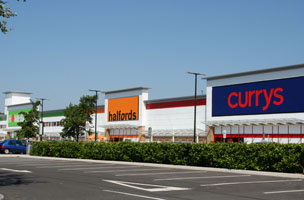 Located just off of the A2030 Eastern Road in Portsmouth, Ocean Retail Park, opposite Admiral Lord Nelson School in Dundas Lane.

Situated on the corner of Burrfields Road and Dundas Lane is the Ocean Retail Park a medium sized retail park home to 8 retail units, the site was previously occupied by the Metal Box factory built in 1952, the factory closed in September 1985.

Retail outlets at the park consist mainly, but not exclusively, of electrical and household goods. The site has a large car park with 650 spaces, parking is free to store customers. The following shops are located at Ocean Retail Park: