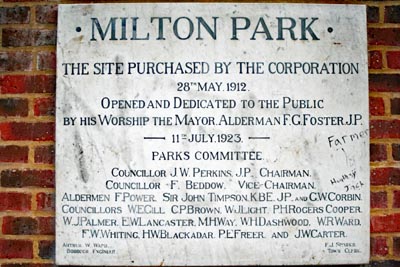 Milton Park is located on the corner of Goldsmith Avenue and Milton Road, it is a multi purpose park with a childrens play area, bowls club and tennis courts.

One of the original farm buildings remains, the thatched barn which has been extended, is now the home of the Portsmouth Players amateur dramatic society.

The land was purchased for use as a park by Portsmouth Corporation on the 28th May 1912, a crememorative stone regarding the park's history can be seen on the side of the Barn, picture above.

Milton Park has a wide range of sports facilities available including,

The park is mainly laid out as grass areas widely used for ball games, occasionally on bank holidays these areas are used by visiting fairgrounds, some formally planted areas exist at the eastern and western areas.

At the eastern edge of the park, the former Milton library building, replaced by the current Beddow Library, is now known as Milton Village Hall and is used for society meetings and can be hired privately for functions. Milton Village hall has halls that can be hired for functions (one of which has access to an enclosed garden) plus a meeting area. 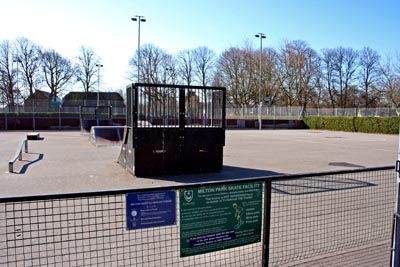